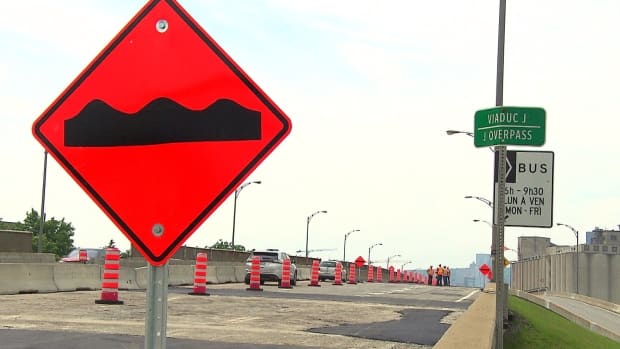 All the westbound lanes of the Bonaventure Expressway, heading toward downtown Montreal, are now reopened after being closed for nearly five hours.

Crews had to make emergency repairs to the roadway and closed the three lanes just after 10 a.m. Monday, according to the Jacques Cartier and Champlain Bridges Incorporated.

The Sûreté du Québec says cars were damaged early this morning on the stretch of highway near the exit for Cité du Havre.

Complete closure of Expy. Bonaventure toward Montreal at exit 2 to make corrections <a href=”https://twitter.com/Qc511_Mtl?ref_src=twsrc%5Etfw”>@Qc511_Mtl</a>

The problem was linked to incomplete work done on the weekend, said Nathalie Lessard, spokesperson for the bridge corporation.

The short section of highway was closed for repairs over the weekend, she explained, but rain cut the work short. The contractor had already scraped away the pavement, leaving an indent roughly 10 cm deep, she said.

There was asphalt added to reduce the impact on cars and signs were put up warning drivers to slow down for the bump, she said. Despite those efforts, vehicles travelling at highway speeds were damaged.

The incident is under investigation, she said.

Drivers of those damaged vehicles can submit claims to the corporation, and send photos and questions by email to [email protected]