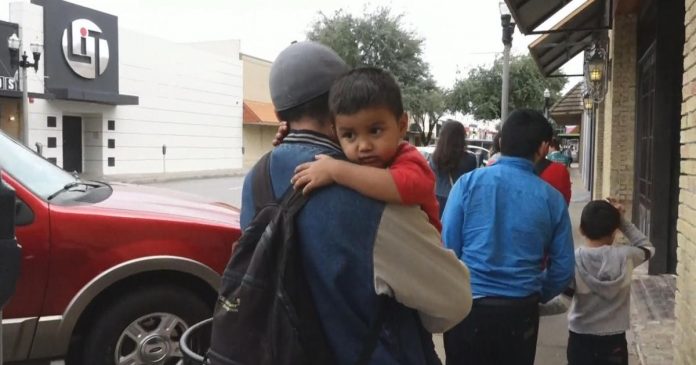 In a rare reversal, President Trump said Wednesday the U.S. will maintain “zero-tolerance” at the border but will allow migrant families to stay together temporarily, backing down on his own administration’s policy separating children from their parents who have come to the U.S. illegally.

U.S. Customs and Border Protection says they are taking “immediate steps” to implement the president’s new executive order. However, it’s unclear if or when the children already separated will reunite with their parents.

Alex Antonio and his 2-year-old son Jeremy were released after being initially detained for the maximum period of 72 hours. The release came around the same time President Trump signed his executive order, reports ‘ David Begnaud. The Honduran man said that while in custody he heard that families were being separated and he feared it would happen to him and Jeremy. For the more than 2,300 children already separated from their parents, the executive order may not change anything immediately.

“There is currently no system in place to reunite children with parents who are in detention,” Open Society Fellow Bob Carey said. He used to run the Office of Refugee Resettlement during the Obama administration, the federal agency responsible for caring for the separated children.

Carey says ORR’s shelter system was designed for minors who arrived alone at the border, typically adolescent boys, and is not equipped for the influx of infants, toddlers and young children that were separated from their parents under the president’s “zero tolerance”policy.

“This is child abuse being perpetrated by a government,” Carey said.

Early Wednesday morning, girls arrived at a facility in New York City, which Mayor Bill de Blasio said housed 239 separated children and that some of them arrived with contagious health issues like chicken pox and lice.

“The youngest to come here, they told us, was nine months old,” de Blasio said on Wednesday.

The government keeps track of the children with a unique identifier called an “alien number.” Name, age, gender and country of origin are also recorded.

Ofelia de los Santos, an official at Catholic Charities in Brownsville, Texas, said the shelters she’s visited are well-run, but it’s not about how nice the facility is.

“It’s the fact that they’re not with their parents,” she said. “When they go to their beds at night, what do you think they think about?”

Children get medical and mental health screenings when they first arrive at the shelters. A case manager is also assigned to identify and vet relatives who can eventually take the children in. That process usually takes about two months.