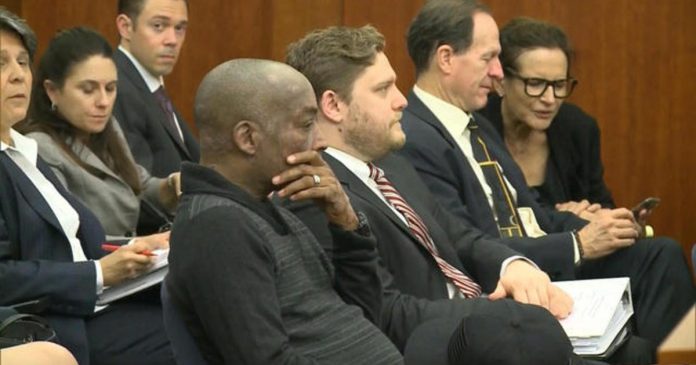 In the first case of its kind to reach trial, a California man dying of cancer is suing Monsanto, the maker of popular weed killer Roundup. Dewayne Johnson used Roundup during his two years as a groundskeeper and blames his 2014 cancer diagnosis on its active ingredient, glyphosate.

The 46-year-old is just one of thousands of people nationwide reportedly accusing Monsanto of failing “to exercise reasonable care to warn of the dangerous risks associated with use and exposure” to glyphosate. Under California law, Johnson’s case was allowed to go first because he is dying.

Monsanto denies the allegations and in a statement to said, “We have empathy for anyone suffering from cancer, but the scientific evidence clearly shows that glyphosate was not the cause. We look forward to presenting this evidence to the court.”

legal analyst Rikki Klieman told “CBS This Morning” on Tuesday that the trial’s outcome will serve as a “bellwether” for the thousands that could follow.

“You have cases in San Francisco, a mass of them. You have another mass of them in St. Louis where Monsanto is located,” Klieman said. “If in fact this plaintiff wins, that creates real momentum for other plaintiffs, and Monsanto would have to rethink its position. However if this plaintiff loses, Monsanto is in a much better position to discourage some of these other cases.”

According to Klieman, the plaintiff is saying he can show scientific evidence that Roundup is what caused his cancer and that Monsanto allegedly knew about the link, failed to warn people and buried evidence from the public. If he can prove all that, he’ll seek punitive damages. Whether that’s possible is questionable.

“Monsanto creates this battle of experts and the literature is clearly on Monsanto’s side. They have 800 studies,” Klieman said.

“There was one study in particular that came out of an agency, out of the World Health Organization, in 2015 and it was the one that said it was a carcinogen and that was what spurred on this litigation according to Monsanto,” Klieman said. “Monsanto says that the plaintiff’s science is junk science, but this judge is going to let that science in. Now, the federal judge who’s looking at multi-district litigation, he has said words like the science is ‘loosey-goosey’ from the plaintiff, and so Monsanto in those cases may have a much better shot.”