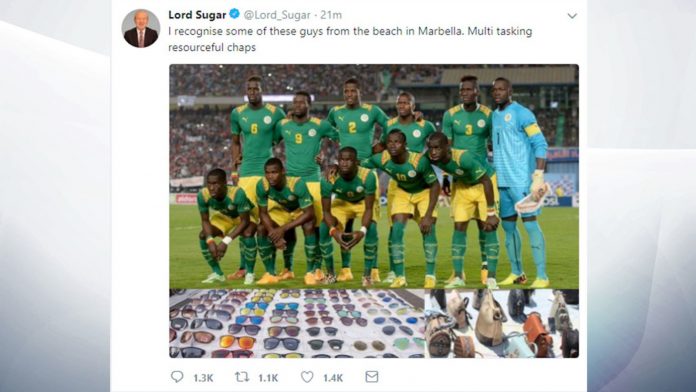 There are calls for Lord Sugar to be investigated by parliament and the BBC after he compared Senegal’s football team to people who sell merchandise on Spanish beaches.

He has since apologised for tweeting the comment, which led social media users to accuse him of racism.

The BBC, which broadcasts his programme, The Apprentice, said the comment had been “seriously misjudged”.

Labour leader Jeremy Corbyn’s spokesman said the tweet was “quite clearly racially offensive, and should be investigated by the parliamentary standards authorities”.

“I will be writing to the House of Lords Commissioner for Standards and the BBC, calling for an immediate investigation.”

Posting a picture of the Senegal team on Twitter, with images of sunglasses and handbags crudely added underneath, Lord Sugar wrote: “I recognise some of these guys from the beach in Marbella. Multi tasking resourceful chaps.”

Twitter user Mike Lewis wrote: “The entire joke revolves around you making a stereotype based on the colour of somebody’s skin. You’re fired pal.”

Actress Kelechi Okafor said he was “constructing this joke on the premise that all black people 1) look alike 2) are poor 3) cannot achieve social mobility”.

Very troubled after seeing @Lord_Sugar racist tweet. I will be writing to the House of Lords Commissioner for Standards and the @BBC calling for an immediate investigation. Racism has no place in Parliament or society. Swift action must be taken. pic.twitter.com/43aXhBYUyi

Following such complaints, Lord Sugar said he had been reading the reaction to his “funny tweet”.

“Seems it has been interpreted in the wrong way as offensive by a few people,” he wrote.

“Frankly I can’t see that – I think it’s funny. But I will pull it down if you insist.”

Later, he offered a full apology, writing: “I misjudged my earlier tweet.

“It was in no way intended to cause offence, and clearly my attempt at humour has backfired.

“I have deleted the tweet and am very sorry.”

I misjudged me earlier tweet. It was in no way intended to cause offence, and clearly my attempt at humour has backfired. I have deleted the tweet and am very sorry.

The BBC said: “Lord Sugar has acknowledged this was a seriously misjudged tweet, and he’s in no doubt about our view on this. It’s right he’s apologised unreservedly.”

A few people did come to his defence. Sam Wilkins said the “witch-hunt” against Lord Sugar was “absurd”, adding: “He hasn’t done anything to harm anyone, and if you don’t like it then don’t follow him.”

Chris Davis said: “The world is too PC… I am (sic) the majority of other people found the funny side to it and could see no offence was meant.”

Lord Sugar is no stranger to controversy on social media.

He took down another tweet which showed Jeremy Corbyn in a car next to Adolf Hitler, following allegations of antisemitism in the Labour Party.

He also appeared to write a poem about the Labour leader.