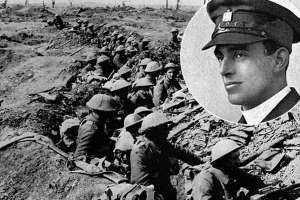 
Many a tale has been told of ‘Woodbine Willie’ – the legendary First World War British Army chaplain who risked his life tending to sick and dying soldiers on the frontline, while giving them cigarettes and spiritual guidance.

But now, research claims he returned home penniless after spending his entire wartime wages on such cigarettes.

‘Woodbine Willie’, the nickname of Reverend Geoffrey Studdert Kennedy, spent the equivalent of more than £43,000 on nearly one million Woodbines for the Allied forces, according to a new book.

Woodbines, which were strong and unfiltered, were not widely available on the Western Front and were considered as gold dust in the trenches. 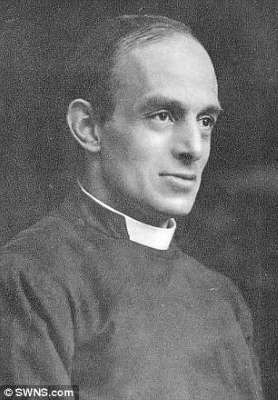 © Provided by Associated Newspapers Limited
New research claims that Studdert Kennedy (left) returned home penniless after spending his entire wartime wages on such cigarettes, known as ‘one last gasper’, for troops who were injured on near death


Historians have long known that Studdert Kennedy ‘administered’ his own cigarettes to men on the frontline to boost morale.

Records also show that he regularly ventured – unarmed – into No Man’s Land, often under heavy machine gun and artillery fire, to give dying troops one final ‘gasper’.

Clutching his Bible for protection, the ‘Battlefield Saint’ would whisper the Lord’s Prayer and hold their hands until the end.

His selfless bravery, particularly at the Battle of Messines, earned him a Military Cross from King George V and the affectionate, lasting nickname, ‘Woodbine Willie’. 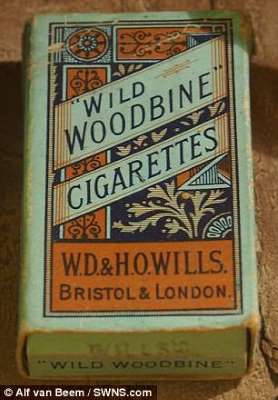 © Provided by Associated Newspapers Limited
Woodbines, which were strong and unfiltered, were not widely available on the Western Front and were considered as gold dust in the trenches


But nobody has ever attempted to calculate the full extent of his generosity until now.

Biographer Dr Linda Parker spent five years researching Studdert Kennedy’s life and estimates he gave away a staggering 865,000 cigarettes at his own expense.

Over the course of nearly three years, between December 1915 and September 1918, Studdert Kennedy spent £43,249 – every spare penny of his Ministry of Defence salary, she believes.

Dr Parker, the author of A Seeker After Truths: The Life and Times of G. A. Studdert Kennedy (‘Woodbine Willie’) 1883-1929, said he sacrificed his own family’s financial future to safeguard the emotional wellbeing of the men in his care. 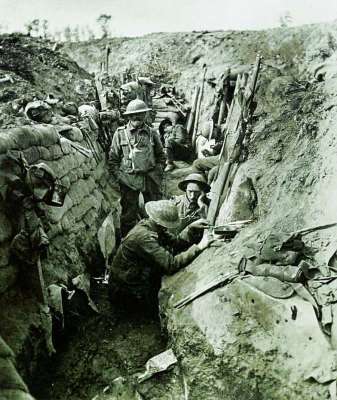 © Provided by Associated Newspapers Limited
His selfless bravery, particularly at the Battle of Messines (file photo above, in 1917), earned him a Military Cross from King George V and the affectionate, lasting nickname, ‘Woodbine Willie’


‘Studdert Kennedy was one of the First World War’s true heroes – a courageous and selfless Christian who gave away everything he had for the benefit of others,’ Dr Parker said.

‘With the exception of his family’s annual living expenses, he spent the rest of his salary – his family’s entire income, really – on the men he took under his spiritual wing.’

He said: ‘Anecdotes about my grandfather’s generosity are part of the annals of history.

‘My grandmother allegedly came home one day to find him dragging their mattress downstairs to give to someone in need, and another time he gave his coat away.’

Andrew added: ‘With this in mind, I’ve no doubt whatsoever that he did everything within his financial means to help those men on the frontline.’ 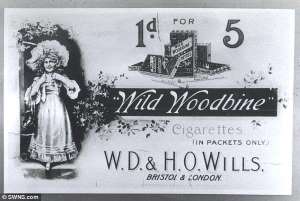 © Provided by Associated Newspapers Limited
Biographer Dr Linda Parker spent five years researching Studdert Kennedy’s life and estimates he gave away a staggering 865,000 cigarettes at his own expense. Over the course of nearly three years, between December 1915 and September 1918, Studdert Kennedy spent £43,249 – every spare penny of his Ministry of Defence salary, she believes


Studdert Kennedy was born in Leeds in 1883 and served as a vicar in a poor parish in Worcester.

When Britain declared war on Germany, he encouraged his parishioners to join the Army and himself enlisted as a Temporary Chaplain to the Forces (TCF).

In December 1915, he was stationed at a railway station in Rouen, France, where he held communion with the troops, penned letters for the illiterate, and prayed with and for young soldiers.

When they left for the frontline, he gave them copies of the New Testament and, to the 96 per cent of soldiers who smoked, one or more Woodbine cigarettes.

Troops were issued with two ounces of cheap rolling tobacco with their rations, but supply was irregular. 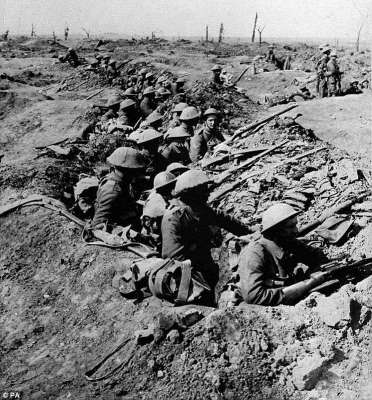 © Provided by Associated Newspapers Limited
Studdert Kennedy spent a total of just over three years in the Army – 13 months on the frontlines at the Somme (file photo, above), Messines, Ypres and the Battle of the Canal du Nord on the Hindenburg Line, where he was gassed and subsequently sent home, being in Worcester on the day of the Armistice


While ready-rolled cigarettes like Woodbines were sometimes available from The Navy, Army and Air Force Institutes (NAAFI), they were expensive and highly prized among the working classes.

News of Studdert Kennedy’s kindness and generosity spread, and by early 1916 he was widely known as ‘Woodbine Willie’.

He was later posted to infantry schools and to military camps where he would give morale-boosting sermons to up to 100,000 men.

But his fame spread – in the Army and at home – when he was sent to the blood-soaked trenches of the Somme, Ypres and Messines. 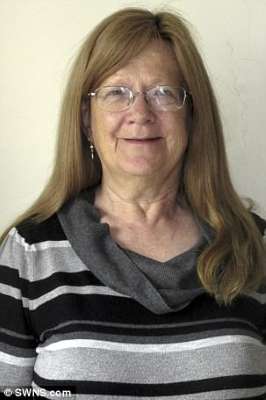 © Provided by Associated Newspapers Limited
By calculating the total number of men he is likely to have met between 1915 and 1918, the average smoking rate among troops at the time, and his propensity to offer one or more cigarettes to ‘every man he met’, Dr Parker (pictured) estimates that Studdert Kennedy gave at least 864,980 Woodbines


The Killed in Action (KIA) rate is believed to have been as high as 17.5 per cent – an average of 1,575 Allied deaths per day. Thousands more were seriously injured.

He routinely prayed with dying soldiers on the frontline and was awarded the Military Cross after running through ‘murderous machine gun-fire’ at Messines Ridge to deliver morphine to men screaming in agony in No Man’s Land – a role he was not expected to do or paid for.

When one asked him who he was, Studdert Kennedy apparently replied, ‘The church.’ And when the soldier asked what the church was doing there, he replied ‘Its job’. 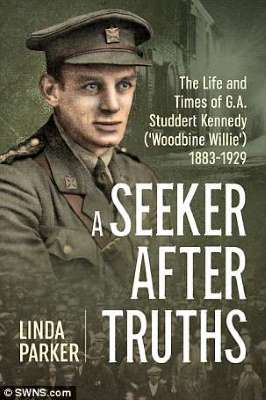 
Speaking in a BBC interview after the war, Colonel John Horace Thursfield, Commander of the 6th Battalion, The South Staffordshire Regiment, with whom Studdert Kennedy was once embedded, said: ‘Nothing pleased him more than to meet his fellow men and to demonstrate he was one of them. Eventually he became a friend to us all.

‘His chief relaxations were tea drinking and cigarette smoking and it was his practice to offer the traditional smoke to any soldier he met.’

Studdert Kennedy’s instinctive generosity was already in evidence long before the war.

He was not independently wealthy and was ‘always impoverished’ because he gave everything he owned – including his only mattress – to those in need.

But historian Dr Parker, whose biography A Seeker After Truths calls upon Woodbine Willie’s writings, sermons and speeches to shed new light on his life and significance as a theologian and public figure, believes his charity knew no bounds. 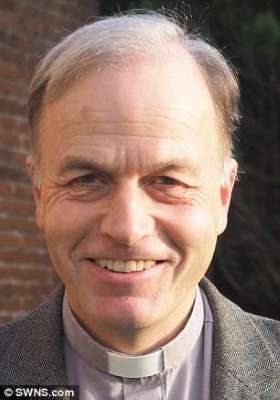 © Provided by Associated Newspapers Limited
Studdert Kenendy’s grandson, The Reverend Canon Andrew Studdert-Kennedy (above), Team Rector in Marlborough, Wiltshire, and an Honorary Chaplain to the Queen (QHC), agrees with Parker’s findings. He said: ‘Anecdotes about my grandfather’s generosity are part of the annals of history’


By calculating the total number of men he is likely to have met between 1915 and 1918, the average smoking rate among troops at the time, and his propensity to offer one or more cigarettes to ‘every man he met’, she estimates that Studdert Kennedy gave at least 864,980 Woodbines.

The remainder was used to cover his family’s food, clothing and general living expenses back in England at their vicarage in Worcester.

His own expenses during the war were minimal as the Army supplied him with food, toiletries and accommodation.

Dr Parker, one of the UK’s leading historians of religion and the First World War, said: ‘People have long known that Studdert Kennedy gave out cigarettes, but no one had previously thought to put a monetary figure on his generosity.

‘Through the course of my research, it became clear that he did, in almost complete certainty, spend virtually everything he owned.

‘He filled his backpack with Woodbines, Bibles and a great deal of love.’

The Battle of Messines was a major offensive conducted by the British Second Army, under the command of General Herbert Plumer, on the Western Front near the village of Messines, Belgium.

Six army Corps were involved in the offensive – three carried out the attack, two remained on the northern flank and one was available at short notice if needed.

The offensive forced the German Army to move reserves to Flanders from the Arras and Aisne fronts, which relieved pressure on the French Army. 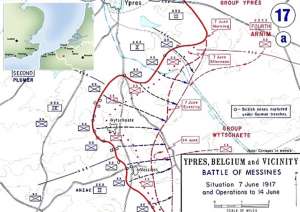 © Provided by Associated Newspapers Limited
The Battle of Messines took place on the Western Front in June 1917 in Belgium, around the village of Mesen


Morale among French troops was low after the Neville offensive in the preceding months failed to achieve its aims.

The tactical objective of the attack at Messines was to capture the German defences along the length of the ridge, which ran from Ploegsteert Wood in the south through Messines and Wytschaete to Mount Sorrel, to deprive the German Fourth Army of the high ground south of Ypres.

They included numerous divisions from Australia and New Zealand.

The German Fourth Army divisions of Gruppe Wijtschate held the ridge; they were later reinforced by a division from Gruppe Ypern.

The battle began with the detonation of 19 mines, which devastated the German front line defences. Ulster soldiers managed to take hill 80 on the first day.

The forces then followed with a creeping barrage, 700 yards (640m) deep, which allowed the advancing British troops to secure the ridge with support from tanks, cavalry patrols and aircraft.

During the battle for Messines Ridge, 7,000 German prisoners were captured and the Allies lost 24,000 men.

The Battle of Messines is considered a prelude to the much larger Third Battle of Ypres campaign, the preliminary bombardment for which began a month later, on July 11 1917.