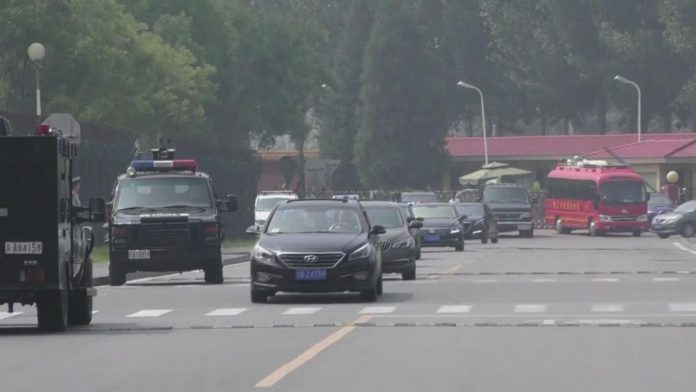 He has been expected to visit the country to brief Chinese President Xi Jinping on his meeting with the US president.

Although Chinese state media did not say if Mr Kim had already arrived in Beijing, a motorcade was seen leaving the city’s airport and roads were closed off near the Diaoyutai State Guesthouse, where senior Chinese officials meet visiting leaders.

It was expected that Mr Kim would meet senior Chinese officials to discuss halting his nuclear weapons programme in exchange for financial aide.

His summit with Mr Trump led to a suspension of US military exercises with South Korea and a signing of a communique indicating a desire for the denuclearisation of the Korean peninsula.

Mr Kim’s current visit to Beijing is his third to China within three months.

The US has long wanted China to use its influence with North Korea to end its nuclear weapons programme, but the relationship between the two superpowers is threatened by a deepening trade war.

Mr Trump agreed to work with Mr Kim toward complete denuclearisation of the Korean peninsula, committed to provide the North’s regime with security guarantees and pledged to end “war games”, which Pyongyang and Beijing have long seen as provocative.

China has welcomed the warming of ties between Washington and Pyongyang.

In a rare move, Chinese state media announced Mr Kim’s visit and said he would stay for two days.

China has only confirmed previous visits after the North Korean leader had left the country.