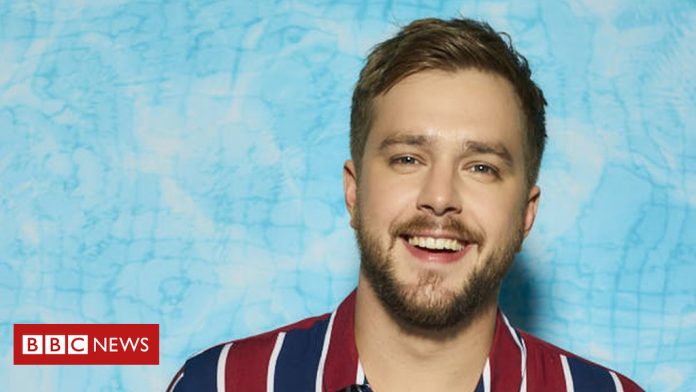 One of the less obvious attractions of hit TV show Love Island is the voiceover provided by 30-year-old Scots comedian Iain Stirling.

The ITV2 show began its fourth series on 4 June and won the highest ratings across all channels in its time slot.

As millions tune in every night to find out the latest exploits of “the beautiful people” in their Majorcan villa, Stirling’s brand of affectionate sarcasm cuts through the posing to bring them back down to earth.

“It’s relationships and gossip,” says the cheeky comic as he tries to fathom the Love Island phenomenon.

“It’s what people are all about. They want the gossip. That’s what everyone talks about.

“It’s like at work, at the office party, everyone talks about who “got off” with who.

“They’re not gossiping about what the vol au vents were like.”

Stirling says the programme taps into the “essential gossipy nature we have as humans”.

For those who have escaped the exploits of the gym-honed contestants, the premise of the show is for the “sexy singletons” to “couple up” and win the hearts of each other and the nation.

Through dates and challenges they chop and change partners (and swimwear) and the couple which survives the public vote – and the threat of new, more attractive islanders – wins.

The show has been criticised for its lack of body diversity. And contestants have been mocked for their lack of knowledge.

One of the first island evictees, Hayley Hughes, admitted she was not familiar with Brexit and thought it meant more trees would be cut down.

But Stirling thinks the contestants are genuine. What you see is what you get, he says.

“I only see the episode same as you do at home,” he says.

“I don’t think after the hour-long episode they go off to do nuclear physics.

“I think that really is what they get up to.”

He adds: “They’re good telly. I guess they are fun to watch.

“So long as they are not hurting anyone they are welcome to do what they like.”

Iain Stirling’s well-timed barbs and mockery have made him a household name among reality TV fans but if his stand-up career had not taken off when he was at university he could have been a prominent Edinburgh lawyer by now.

He studied law at the University of Edinburgh and completed his degree but decided it was not for him when comedy took over.

That was about a decade ago and he says some of his friends from that time are now starting to change their minds about their careers.

He says: “I definitely enjoyed it and I am glad I did university – four years of not being in the public eye – and I met all my best friends doing it, so I am definitely glad it happened.

“I look back now and think there’s no way I would be able to study for a law degree now.

“For a long time on a Friday after work I’d be in jeans and a T-shirt and they’d be in a three-piece suit.”

Iain will be back in Edinburgh in August. It’s the first time in six years he won’t have his own show at the Fringe.

But he is hosting Iain (Stirling) Does Jokes (With Pals) at the EICC, where he has invited his favourite comedians from the Fringe to “hang out and have some fun”.

It gives him a chance to move back in with his mum and dad temporarily while he hosts a show at the Fringe.

“I’ll stay at my mum and dad’s as I do every year. But every year it gets a little bit weirder as I get older,” he says.

After that he finishes extra dates on his U Ok Hun?x tour with one at the city’s King’s Theatre in September.

But for the next month, home is Majorca, in a villa close to the contestants.

“We watch that and start writing some jokes and normally it’s done and recorded by about 19:00.”

He admits his girlfriend, TV presenter Laura Whitmore has been asking him for the inside gossip.

“I think her friends and family are more into it than she is but she definitely gets into it,” Iain says.

“I think everyone has a dip into it.

“But I’m just doing what I always do – going into a booth and being sarcastic about people.”

Who is Iain Stirling?

Ian Stirling, 30, is from Edinburgh where his stand-up career started in his final year of studying law at university.

Kids will know him from CBBC’s The Dog Ate My Homework and others will recognise him as the voice of ITV2’s Love Island.

He is an Edinburgh Fringe favourite and has performed five sold-out and critically-acclaimed shows.

He has also written a book Not Ready To Adult Yet, due to be published on 23 August.