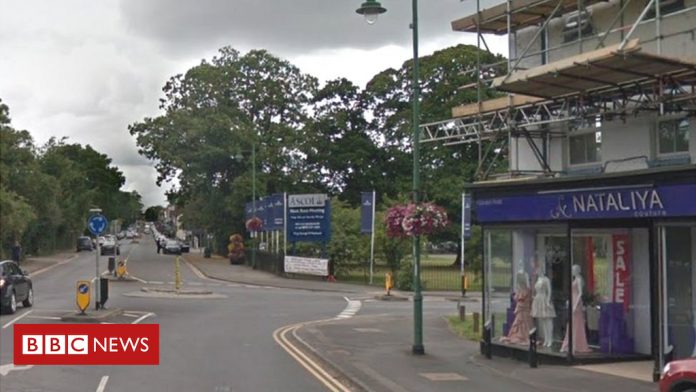 A horse-drawn carriage used to take people to Royal Ascot has crashed into a shop window after running out of control in the Berkshire town.

An eyewitness described seeing the horses bolting down the High Street and careering over a roundabout before crashing through the window.

Gary Copeland said one of the horses “flipped over” while the other was “jammed into the window”.

One person suffered minor injuries and a horse was also injured.

Mr Copeland said he had been driving behind the carriage when the incident unfolded near the Winkfield Road junction at about 18:00 BST.

He said: “Suddenly I saw the horses start to bolt and pulling down the high street very, very quickly – out of control.

“At the roundabout one of the horses flipped over and landed on the floor. The carriage carried straight on on to the pavement.

“I could see one of the horses jammed into the window of the dress shop. I saw people on the floor – they may have been thrown off the carriage.”

Organisers of Royal Ascot said they believed one person had suffered minor injuries and one horse had been taken away in an equine ambulance but the other was unhurt.

They said the carriage was operated by a private company, not the racecourse.

Owners of the dress shop, Nataliya Couture, said it was closed at the time and no-one was inside.