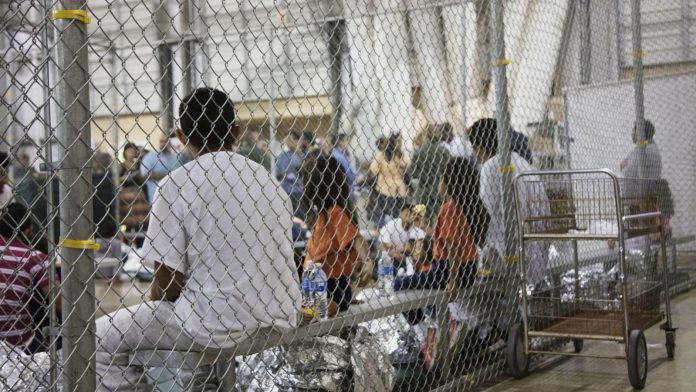 Young migrant children, many of whom have been taken from their parents’ arms, are being kept in cages in facilities along the southern US border, according to journalists who were allowed inside.

The Border Patrol responded to criticism and protests over US President Donald Trump’s “zero tolerance” policy for illegal immigrants by allowing the visit to the facility in south Texas.

Photos from inside a former warehouse the media were given access to showed people divided into separate wings for unaccompanied children, adults on their own and mothers and fathers with children.

Associated Press reported that the lights stay on for 24 hours a day and the cages in each wing open out into common areas where people can use portable toilets.

The Border Patrol said there were approximately 200 minors inside the facility without any parents.

There are no toys or books for the children to play with and images released by the Border Patrol showed them wrapped in foil blankets of the kind usually seen after a natural disaster.

I just exited a border patrol “processing facility” known as the “icebox.” It is nothing short of a prison.

Reporters were not allowed to interview any of the detainees or take photos.

Donald Trump responded to growing criticism over the facilities on twitter today.

In a series of tweets he tried to deflect the argument back onto crime, claiming: “Children are being used by some of the worst criminals on earth as a means to enter our country.”

It is the Democrats fault for being weak and ineffective with Boarder Security and Crime. Tell them to start thinking about the people devastated by Crime coming from illegal immigration. Change the laws!

He said that in Germany crime was “way up” due to immigration, and blamed democrats for not supporting him in helping change immigration laws in the US.

Sky’s US correspondent Mark Austin said Trump was trying to get a broader immigration policy, but said the growing voices of discontent may force his hand.

He said: “As democrats and republicans pile in on this and his wife now going public it may well be that Donald Trump has to back down and use his executive powers to change the separation of families.”

Stories have spread of parents on the border being told their children were being taken away for a bath, only for them not to be returned to them. It is then nearly impossible for the parents to find out where their children have gone.

A handout, called ‘Next Steps for Families’ is given to all asylum seekers with complicated instructions on how to locate their children.

Politicians and religious groups are also among those to have criticised the “inhumane” policy, and Melania Trump – who last week returned to the public eye for the first time in almost a month – has admitted she has found it difficult to watch the events unfold.

The first lady’s spokeswoman, Stephanie Grisham, said she “hates to see children separated from their families” and believes the US should be a country that “governs with heart”.

But she added that “all laws” needed to be followed and called upon “both sides of the aisle” to “come together to achieve successful immigration reform”.

A representative for one NGO, Michelle Brane, director of migrant rights at the Women’s Refugee Commission, said she had spoken to a 16-year-old being kept at one of the centres who had to teach other youngsters how to change a disposable nappy because they ended up caring for an unaccompanied toddler.

Agents running the holding facility said everyone detained is given adequate food, access to showers and laundered clothes, and medical care.

But senior political figures have criticised the conditions.

Republican Congressman Peter Welch tweeted after his visit to a facility: “I saw chain link cages full of unaccompanied children. They sat on metal benches and stared straight ahead silently.”

In another tweet he said “it is nothing short of a prison”.

Writing in the Washington Post, former first lady Laura Bush said: “These images are eerily reminiscent of the Japanese American internment camps of World War II, now considered to have been one of the most shameful episodes in US history.”

I saw chain link cages full of unaccompanied children. They sat on metal benches and stared straight ahead silently

He tweeted: “Other governments have separated mothers and children,” along with a black and white photo of the Birkenau concentration and death-camp in Poland.

And the top UN human rights official called on the US to halt its “unconscionable” policy of trying to “deter parents by inflicting such abuse on children”.

Celebrities including singer John Legend, actor John Cusack and filmmaker Rob Reiner are among those who have been vocal in their opposition to the policies of the Trump administration which they said had created the centres.

In Texas’s Rio Grande Valley, the busiest corridor for people trying to enter the US, Border Patrol officials argue that they have separate adults from children as a deterrent, as part of a crackdown on migrants.

“When you exempt a group of people from the law… that creates a draw,” said Manuel Padilla, the Border Patrol’s chief agent. “That creates the trends right here,” he added.

Mr Padilla said agents in the Rio Grande Valley have allowed families with children under the age of five to stay together in most cases.

Nearly 2,000 children have been taken from their parents since Attorney General Jeff Sessions announced the policy, which directs Homeland Security officials to refer all cases of illegal entry into the US for prosecution.

US law states that children cannot be jailed which is why they are sent to these shelters while their parents await federal court proceedings.

Yes, of course they’re concentration camps. They aren’t the unique subset of death camps that were invented by the Nazis for genocide, or even Arctic Gulag camps built for hard labor. But they’re camps created to punish a whole class of civilians via mass detention without trial. https://t.co/c8edQna4Vf

Mr Trump has tried to blame the Democrats, who hold no levers of power in government, for the situation.

On Monday he tweeted: “Why don’t the Democrats give us the votes to fix the world’s worst immigration laws? Where is the outcry for the killings and crime being caused by gangs and thugs, including MS-13, coming into our country illegally?”

He carried on: “The people of Germany are turning against their leadership as migration is rocking the already tenuous Berlin coalition. Crime in Germany is way up. Big mistake made all over Europe in allowing millions of people in who have so strongly and violently changed their culture!

“We don’t want what is happening with immigration in Europe to happen with us!”

Counsellor to the president, Kellyanne Conway rejected the idea that Mr Trump was using the children as leverage to force Democrats to negotiate on immigration and his long-promised border wall, even after Mr Trump tweeted Saturday: “Democrats can fix their forced family breakup at the Border by working with Republicans on new legislation, for a change!”

Last week Mr Sessions was criticised after he cited a verse in the Book of Romans during a speech to law enforcement about the policy: “I would cite you to the Apostle Paul and his clear and wise command in Romans 13, to obey the laws of the government because God has ordained them for the purpose of order.”

Legend was among those who criticised house speaker Paul Ryan over a tweet he sent on Father’s Day which said: “Liza, Charlie and Sam are my highest priority. Wishing all of the dads out there a happy early #FathersDay.”

Legend responded with: “Seriously, f*** you. Reunite the families at the border and we can talk about father’s day.”

Ivanka Trump also came under fire for wishing her father a happy Father’s Day on Instagram given the controversy.