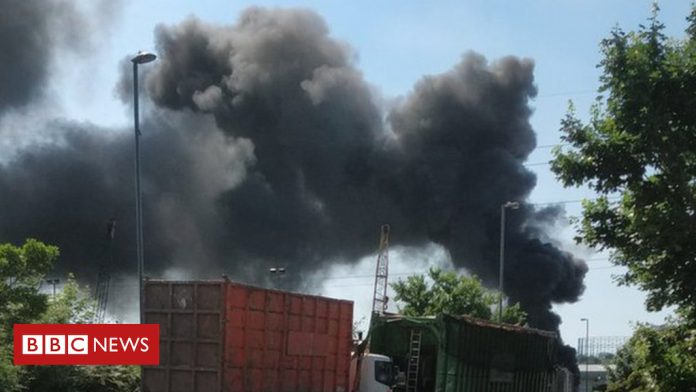 Plumes of black smoke have been spotted for miles across Birmingham as tyres are believed to have caught fire along a street lined with industrial units.

The fire was first reported at 15:22 BST along Crawford Street, Saltley

Crews were sent out to tackle the blaze amid reports of gas bottles and fridges being at the scene.

More than 30 people had called 999 to report the blaze, West Midlands Fire Service said. It is not yet known what started the fire.

The fire is now under control, the fire service has confirmed.

A total of eight firefighters, with one crew from Ladywood and a brigade response vehicle, were sent to the scene.

The fire service released a video of what firefighters were dealing with and encouraged members of the public not to call in about the blaze.

Freddie Mercury: Secret affair with Star Wars’ Carrie Fisher WHILE he was with Mary...