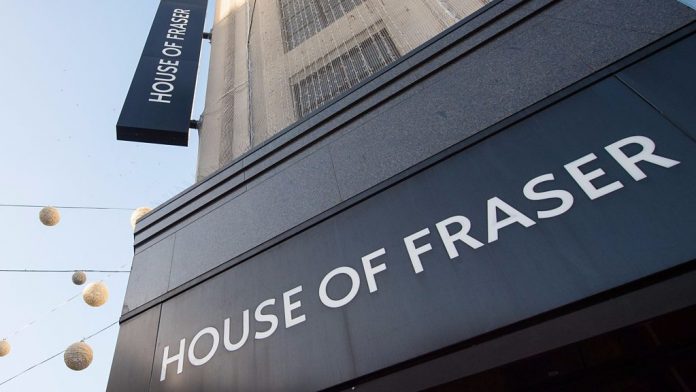 Creditors vote on Friday on whether to accept House of Fraser’s plans to close more than half its stores.

It is a make-or-break moment for the 169-year-old business.

The department store chain wants to shut 31 of its 59 shops and impose huge rent cuts on 10 others that it intends to keep.

Six thousand jobs are at risk in a drastic attempt to save the chain from collapse. If the rescue plan fails, administration is likely.

But High Street landlords are furious about the way they’re being treated. They are the creditors who have to shoulder the burden of financial losses.

Many properties are owned by institutional investors who rely on store leases to provide a steady income stream for pension funds and insurers.

“Landlords are in an invidious position. We enter into these long-term contracts in good faith, with pensioners’ income and security often at stake,” says Chris Taylor, head of private markets at Hermes Investment Management.

House of Fraser is using what’s called a company voluntary arrangement (CVA), a form of insolvency proceedings, to overhaul its business.

These CVAs are being increasingly used by struggling retailers as a way to close stores.

The House of Fraser CVA is the most contentious restructuring deal yet.

The plan requires approval from 75% of its unsecured creditors. All creditors get a vote, but the value of the vote depends on how much they are owed.

Under insolvency rules, landlords’ claims are already heavily discounted because of how accountants judge their losses. The issue for landlords is that their “say” or voting rights in the CVA process is discounted by a further 75%, which they believe is grossly unfair.

The BBC understands that even if most landlords vote against the plan, they won’t have enough clout to win the day.

“With landlords’ voting power reduced by 75% of the value of their claims, the dice are clearly loaded against them in the CVA process,” says Mark Fry, from the restructuring firm Begbies Traynor.

It is helping to advise a group of landlords on the CVA, along with property advisory firm, JLL.

“Even if the majority of landlords were to vote against the CVA, that would not be enough to stop it being approved in its current form, leaving landlords taking all the pain of the CVA process whilst House of Fraser’s shareholder takes out £70m,” he says.

The current House of Fraser owner, Chinese firm, Nanjing Cenbest, wants to sell a 51% stake to another Chinese company, C Banner, which is also the owner of Hamleys, the toy store.

That deal depends on the CVA. If it goes ahead, C Banner has promised to invest £70m into the business. Nanjing Cenbest will receive £70m as well.

It’s not an unusual outcome. Property owners are often outvoted by trade suppliers, who usually have less to lose.

There’s been little sympathy for landlords until now. Sir Ian Cheshire, the chairman of Debenhams, recently compared leases to a “straitjacket… killing more and more retailers”.

House of Fraser used to own a chunk of its stores. It sold 15 of them in 1999 on so-called sale-and-leaseback deals. The company raised £50m by agreeing to take long leases with its new landlords, many of whom are the same landlords who it now wants to shoulder heavy losses.

House of Fraser’s current management team view things differently. They argue that landlords have enjoyed two decades of guaranteed income with upward-only rent reviews and that is no longer sustainable in today’s very different retail environment.

They say the pain from the CVA is being shared across the entire retail supply chain and that they’ve been trying to find a solution with landlords for many months.

But it is pension holders who may ultimately be the biggest financial losers.

Split of ownership for House of Fraser stores due to close:

“My concern is that these CVAs begin to chip away at the integrity of British property as an important source of investment, with unintended consequences,” says Chris Taylor.

“We accept that there are situations where a CVA is the right option. But too often there’s a complete lack of transparency and credible business plan, and it ends up being used as a quick way to cut rents.

“Landlords end up being corralled into making a fairly brutal decision and effectively cross-subsidising one retailer in a town or shopping centre, where similar businesses in similar units operating nearby do not have the same assistance. This creates a moral hazard.”

Landlords want the government to launch an urgent review into the use of CVAs, as well as bring in tighter rules and oversight.