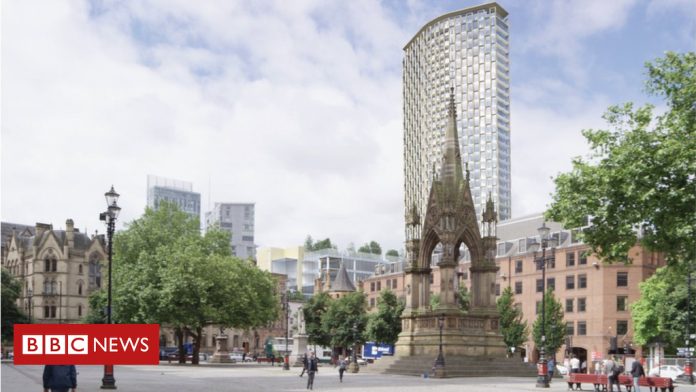 Gary Neville and Ryan Giggs’ £200m development in Manchester has been given the green light, investors say.

The scheme, centred around a new tower in Jackson’s Row, was backed by council officers in March after being revised following criticism from conservation groups including Historic England (HE).

The secretary of state confirmed there would not be a review.

Mr Neville said he was “delighted” but campaigners said they were “extremely disappointed”.

HE had objected to the original St Michael’s scheme, which included two skyscrapers and the demolition of the Sir Ralph Abercromby pub, on the grounds that it would “erase” the area’s history.

But planning officers said the benefits would “outweigh” any damage “to the historic environment”.

In a statement, the secretary of state for Housing, Communities and Local Government confirmed the government would not use its power to “call in” the planning decision, adding “he is content that it should be determined by the local planning authority”.

The scheme includes a five-star hotel with 216 bedrooms and a 39-storey tower with 189 apartments as well as office space, a rooftop terrace, a public square and a synagogue.

The Victorian Society was among conservation groups which had objected to the scheme.

Conservation adviser Anna Shelley said the scheme, even after revisions, would “cause substantial harm” to the “significance” of the city’s grade I-listed and “nationally important” town hall.

Save Britain’s Heritage said it was “surprised and concerned” that the scheme had not been called in.

Sir Richard Leese, leader of Manchester City Council, said: “St Michael’s is a case in point for the type of high-quality development that our city centre needs.

The Jackson’s Row area has been underwhelming and underused for too long and we welcome the decision by the secretary of state to move this important project into the next phase.”