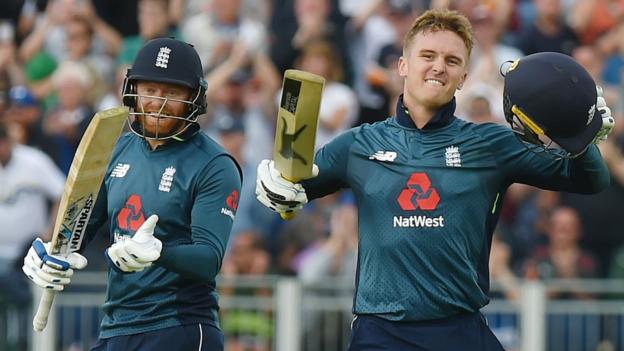 England eased to their highest one-day run chase against Australia to close in on a 5-0 series whitewash.

Jason Roy scored a superb century and Jonny Bairstow hit 79 as England surpassed the tourists’ 310-8 to win by six wickets at Chester-le-Street.

Shaun Marsh and Aaron Finch had hit hundreds for Australia but the result was never in doubt once England openers Roy and Bairstow put on 174.

Jos Buttler smashed 54 from 29 balls to seal victory with 32 balls to spare.

England, who now lead the series 4-0, will complete their first one-day international series whitewash over Australia if they win the final game at Old Trafford on Sunday.

After smashing 481-6 in the third game of the series on Tuesday, Australia might have feared the worst when Roy and Bairstow plundered their bowling attack once more in a devastating display of hitting at the top of the order.

Chasing 311, they took few risks in scoring at more than seven runs an over in pursuit of their target, which was to become England’s second highest successful run chase in this format.

Roy mixed the odd lusty blow with numerous eye-catching drives through the off side – including one sumptuous four off the back foot through point – while Bairstow played the most delightful straight drive as he motored along in Roy’s slipstream.

Australia had no answer to an opening partnership which is quickly becoming one of the best the modern game has experienced.

Their fifth century stand together – in only 16 games – surpassed the previous first-wicket record for England held by Marcus Trescothick and Nick Knight, while they now hold the highest average at the top of the order for an opening pair batting together more than 15 times.

They average 68.62 for the first wicket, which is 16 runs more than Gordon Greenidge and Desmond Haynes averaged together – albeit in a vastly smaller timeframe than the legendary West Indies pair.

England stumbled slightly when they both fell in quick succession, but Alex Hales played a mature innings to hold the run chase together before Buttler unfurled a succession of innovative shots to the boundary which put Australia out of their misery.

When Australia won the toss and chose to bat, it felt like a nod to the previous match when Tim Paine called correctly and put England in.

That choice proved to be a mistake as England romped to their world record score.

Perhaps mindful of the need to avoid further embarrassment on what is proving to be a disastrous tour, Australia were noticeably careful in the construction of their innings.

Part-time spinner Joe Root was able to rattle through 10 overs for a reasonably economical 44 runs just after the midway point in the innings as Finch and Travis Head carefully picked their shots.

And while England struggled for wickets, despite the bowlers finding plenty of swing, they were content to let Paine’s team nurdle their way towards 300.

There were some big shots from Finch and Marsh as they approached their centuries; innings which laid the foundations for a rather outdated onslaught in the final overs.

However, they were both removed shortly after passing 100 and the lower order fell in a heap – David Willey (4-43) picking up four wickets at the end and Mark Wood impressing with his pace and ability to get the ball to angle in and cramp the batsmen for room.

The wicket of Marsh was particularly memorable for a magnificent piece of fielding which saw Roy acrobatically throw the ball back in from the boundary, where it was caught by debutant Craig Overton.

Ex-England spinner Graeme Swann on BBC Test Match Special: “I never played in a one-day side so confident, so blase about chasing a big total.

“This is even more impressive than the 481. It was so ruthless, so un-English. It was like the All Blacks.

“Roy and Bairstow are a frightening prospect. You wouldn’t want to be any of the bowlers at the World Cup next year, knowing you’ll be faced by those two.”

England captain Eoin Morgan: “It was a pretty solid performance all round. The bowlers struggled to take wickets early on but the other way you can control the game is the run-rate and they did that exceptionally well.

“Australia never got away from us, and David Willey kept them down to a chaseable total at the end.

“The 5-0 doesn’t hold huge significance. The opportunity to win a game against a good side is huge.

“We’re only a year away from the World Cup now and our preparations in different grounds around the country need to be good. Manchester presents a different challenge and different conditions so hopefully we adapt well again.”

Australia captain Tim Paine, who dropped a regulation catch off Alex Hales behind the stumps: “We were 30 or 40 short in the end. We got ourselves into a good position and failed to capitalise in the last 10.

“There was a patch there when we got ourselves back in the game, unfortunately we dropped a catch and they took it away from us.

“I’m trying to enjoy it but when it rains, it pours. You have to catch those but it just popped out.

“We came here with an inexperienced side. It’s not an excuse but they’re the best side in the world and they are really hard to beat.”