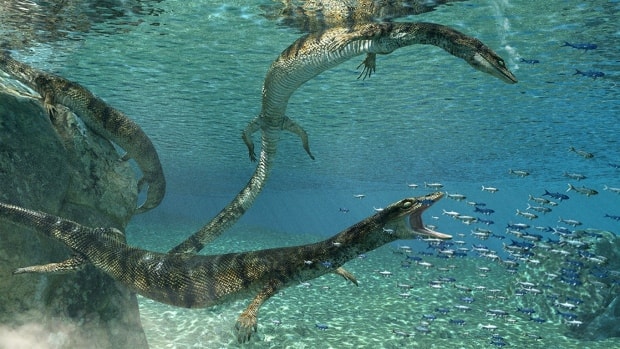 University of Alberta researchers have discovered a new species of ancient underwater lizards in a fossil so well preserved they can see what it had for lunch.

“We know what it was eating,” said Ilaria Paparella, a PhD candidate who worked on the fossil. “We have a tiny fish bone in the stomach.”

Fossils of Primitivus manduriensis were so unspoiled that traces of the 70-million-year-old beast’s scales and muscle tissue were preserved.

“We can actually see the shape of some of the scales and we can see the muscles,” Paparella said. “It’s pretty amazing.”

The metre-long predator with the long neck is a cousin of a mosasaur, a gigantic marine reptile that prowled the oceans of the Cretaceous period, along with terrestrial behemoths such as T. rex.

The new species extends the time during which that group of animals is thought to have lived.

“We thought that this group of lizards only lived until 85 million years ago, so this one expands the range. It’s most recent, the youngest.”

Could probably get along on land

It’s long, flat tail, paddlelike limbs and pointed snout made primitivus well-adapted for swimming and — judging by its stomach contents — catching fish. But Paparella said bones from the pelvic area suggest it could probably also get along on land.

Mosasaur-like fossils are found around what is now southern Europe and the Mediterranean, Paparella said. They’re common enough that fossils from widely separated areas often turn out to be the same species.

“This one in particular is quite peculiar for this group. This guy has a long neck and long tail, but its trunk is fairly short.”

Paparella came upon the fossil when a former professor of hers from Rome called to tell her local people from the Puglia region in southern Italy had found something unusual. The area around the town of Nardo is known to be a prolific source of fish fossils.

“Even somebody that doesn’t know anything about it can recognize the shape of a fish in the rock,” Paparella said.

But this one was clearly different.

Fieldwork on the site revealed what the local people had turned up was in fact something entirely new. Paparello hopes to return to the site to see what else it holds.

“We hope the fossil will open the way to do more fieldwork.”

There is more than one reason to return. The local wine, from a grape called primitivo, is among Paparello’s favourites.

“The town of Nardo where the specimen was found is where lots of this wine is produced, and while we were there for fieldwork we decided that it was the perfect name for the new species, in order to be forever associated with the place where it is from,” Paparella said.

“(It’s) not very scientific, but simply because we like wine, and this wine in particular.”