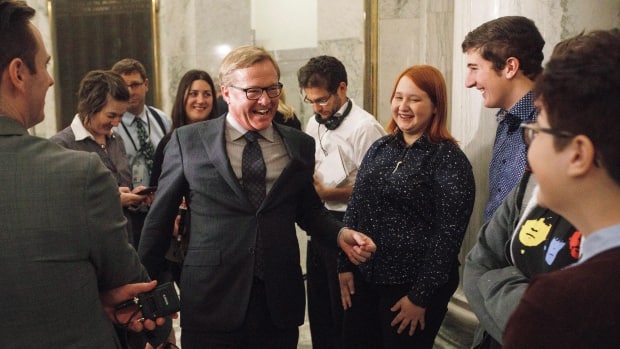 A Court of Queen’s Bench judge in Medicine Hat, Alta., is to hear arguments Wednesday filed on behalf of 25 faith-based schools and others to put the law on hold pending a constitutional challenge.

Education Minister David Eggen says he wants the issue cleared up as soon as possible, because legal wrangling leads to confusion and concern on the part of students.

“Uncertainty created by a court case like this … seeks to counter a lot of the progress that we’ve made to create safe and caring environments for kids and I find that pretty disturbing,” Eggen said in an interview.

The lawsuit was filed in April in response to a law passed by Premier Rachel Notley’s government late last year.

Parents kept out of loop

Leading the legal challenge is the Justice Centre for Constitutional Freedoms. The group argues in court documents that keeping parents out of the loop violates multiple charter freedoms, including freedom of religion and expression.

The group also says the law has “stripped parents of the ability to know fully where their children are, who they are involved with, and what they may be encouraged to think or do.”

Schools have until the end of June to file information to the government showing they are complying with the new legislation.

The lawsuit asks the judge to put that order on hold pending the full airing of concerns over the law’s constitutionality.

The government, in its legal filings, says the applicants have misstated the role of the alliances and adds that charter freedoms have not been infringed.

“(The applicants) speculate that GSAs are clubs aimed at providing children with sexually explicit material and at making children vulnerable to being preyed upon,” says the government.

“In fact, GSAs focus on creating a safe space where students can socialize, be themselves, make friends and help other students understand the importance of being respectful to LGBTQ people.”

The peer groups have been the subject of heated political debate for years.

Notley’s government made the change to the law last year after Opposition United Conservative Leader Jason Kenney said he believed parents, in cases where their children’s safety was at risk, should be told when they join a gay-straight alliance.

Kenney has never explained how teachers should be able to effectively judge when a child’s safety is at risk.

Advocates say children can tell their parents any time they want about being in a gay-straight alliance. They say even the possibility that parents could be told would keep kids from joining.

The United Conservatives have a troubled relationship with GSAs. At the party’s founding convention last month, rank-and-file members clashed with Kenney after they voted in favour of having the party endorse the principle that parents always be told when their children join the group — no matter the circumstance.

Kenney said he wouldn’t include that in the party platform, because it must reflect the needs and values of all Albertans.