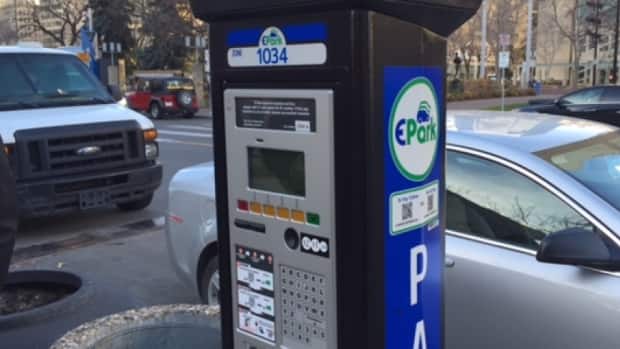 Parking in downtown Edmonton is about to get pricier for people with disabilities.

As of July 15, cameras will replace parking enforcement officers that issue tickets in the city’s EPark zones. The cameras can scan license plates to check for payment, but they can’t identify disability parking placards, which have served until now as free passes in the zones for up to two hours.

“We are committed to improving accessible parking for Edmontonians and their families, and appreciate your patience and understanding as we introduce this new parking technology,” city operations manager Gord Cebryk wrote in a June 13 letter to placard holders.

Many people with disabilities and their family members are criticizing the city’s decision — and that line in the letter in particular — because they say the technology change will make parking less accessible for placard holders.

Buterman uses canes and crutches and has taken advantage of courtesy parking in EPark zones. He said the new system will make parking more costly and cumbersome for people with disabilities.

Nearly 100 marked accessible parking stalls in the city remain free for people with disabilities to use. But they can be hard to find, and some advocates complain they’re an insufficient solution.

“There are not very many spots that are available, especially downtown, and they’re always full,” said Lincoln Ho, who often drives his mother, a placard holder, downtown.

Members of the Accessibility Advisory Committee, a group that reports to city council on issues affecting people with disabilities, advised against the change several times during talks with city officials over the past two years.

They also proposed solutions, including a sticker that cameras could detect on license plates.

“It’s unbelievable that there couldn’t also be a technology that would be able to scan for a red or blue disabled tag,” Buterman said.

Zachary Weeks, chair of the AAC, said the change will affect him personally; he uses a wheelchair and works downtown. He said he’s more concerned about the thousands of other placard holders, especially people with low incomes.

“While we appreciate advancements in technology and ways to improve our parking, we just can’t support this at this time,” he said.

‘We are listening,’ city says

In a statement sent to CBC News Monday, city operations manager Gord Cebryk said the new technology will allow the city to better manage parking and free up enforcement officers to police other locations, such as school drop-off and pick-up zones.

“We are listening to the issues that placard holders are raising and we are committed to taking their important feedback into account as we determine next steps for implementing automated enforcement,” he said in the statement.

According to Cebryk’s letter, there will be a grace period for placard holders. City bylaw officers will cancel one parking ticket per person during the transition.

Both the City and the AAC encouraged people with concerns about the changes to call 311.