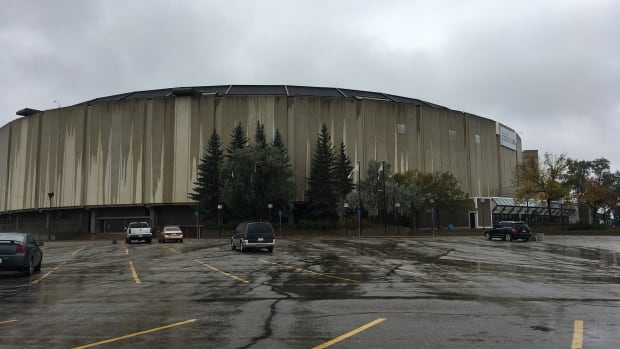 When it comes to bringing Edmonton’s dead coliseum back to life, almost everything is on the table.

The future of the abandoned Northlands Coliseum remains unclear but there are more than a few ideas about how to revive the former home of the Edmonton Oilers.

An administration report outlining the progress of development project, and ongoing public consultations, will be submitted to the city’s urban planning committee on Tuesday.

The city will present the pitches to the public at a pair of open houses Thursday at the Edmonton Expo Centre from 1-3 p.m., and from 5-8 p.m.

After the 80-hectare property was shuttered in January, with no development plans for its future in place, residents were asked for their ideas.

Since then, through open houses and online surveys, the city has received 104 competing pitches, ranging from an amusement park to a homeless shelter.

“Some people are talking about introducing a boating or artificial lake facility, an aquarium, festival grounds, a medium-sized soccer facility, or relocating Telus Field.”

The final fate of the building where the Oilers built their dynasty in the 1980s remains undecided.

It’s unclear if the old building can be saved from the wrecking ball, but there is an appetite for redevelopment, said Brenneis.

‘Trying to find that sweet spot’

One pitch would see the old building transformed into a sun-filled atrium. Another proposal would see the site re-purposed into a year-round urban farming “incubator” with aquaponics and vertical vegetable gardens.

Architecture firm Agora Borealis proposed to renovate the site into a “village” that would house 700 families, a hotel, and senior and student residences. In that plan, the former ice surface would be turned into a recreation area.

“There are competing interests,” Brenneis said in an interview with CBC Radio’s Edmonton AM.

“That will be the fun part of this project, is trying to find that sweet spot … We’re hoping to really find out what Edmontonians are looking for.”

The city will present the pitches to the public at a pair of open houses Thursday at the Edmonton Expo Centre from 1 – 3 p.m., and  5-8 p.m.

Submissions will be evaluated, with a final plan expected to go to city council early next year.

He has high expectations for its second life in north Edmonton.

“It’s really an exceptional site,” Brenneis said.  “It’s close to downtown, with accessible transportation on an LRT line, it’s anchored by a beautiful park in the south end. It’s in a mature area of the city with thriving neighbourhoods around it.

“There’s lots of momentum in the area.”