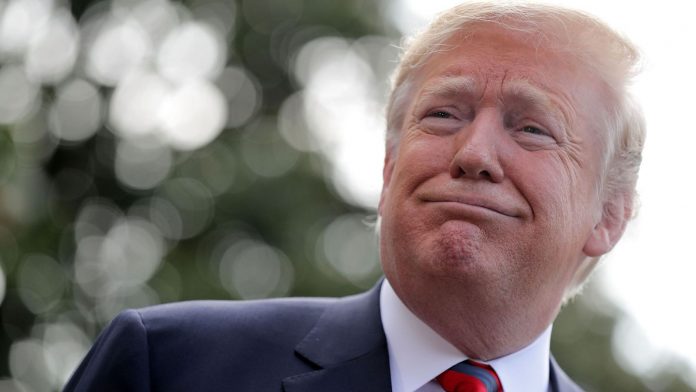 US President Donald Trump has defended the policy of separating migrant children from their parents at border camps.

Responding to criticism of conditions on the southern US border, where families are split up and young children are being kept in structures akin to cages, he said the US will “not be a migrant camp”.

Speaking at the White House the president blamed the Democratic party, despite the tough policy being enacted by his administration.

“If the Democrats would sit down instead of obstructing we would have something done very quickly,” Mr Trump said. “We’re stuck with these horrible laws.”

Nearly 2,000 children have been taken from their parents since Attorney General Jeff Sessions announced a policy directing Homeland Security officials to refer all cases of illegal entry into the US for prosecution.

It is reported that lights are kept on 24 hours a day in the holding facilities, which are divided into sections for unaccompanied children, adults and families.

There are no toys or books for the child inmates and photographs show them sleeping under foil blankets of the kind normally used after natural disasters.

Stories have spread of parents being told their children were being taken for a bath, then not seeing them return. It is then nearly impossible for the parents to find out where their children have gone.

Mr Sessions said earlier on Monday that enforcing immigration laws resulting in the separation of families is necessary.

The president echoed that message in his later comments, saying “a country without borders is not a country at all,” and that the US needs “to take care of our people”.

He continued to point to Germany as a warning of the dangers of immigration and alluded to high-profile killings in which migrants were suspects. Official statistics show crime in the country dropped nearly 10% in 2017.

The president also claimed “death and destruction” had been caused by “the people going into this country”.

Outrage at family separations has been widespread in the US, with both Republicans and Democrats coming out against the government policy.

Former first lady Laura Bush wrote that the images were “eerily reminiscent of the Japanese American internment camps of World War II” while Republican congressman Peter Welch, who visited the facility, tweeted that it was “nothing short of a prison”.

Former Trump adviser Anthony Scaramucci has said it “doesn’t feel right” for the administration to blame Democrats and use the separation of families as a “negotiating point”.