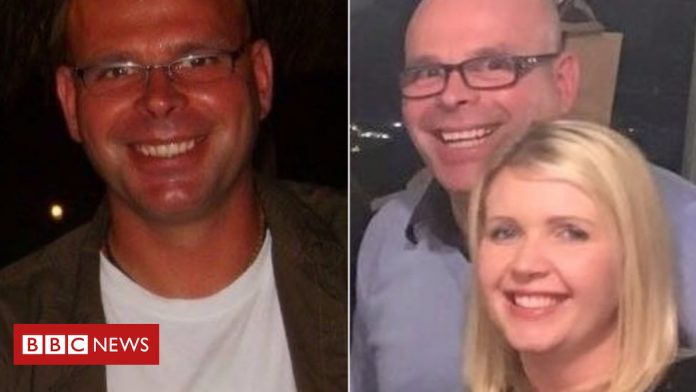 Co-workers of a engineer who died in an ammonia leak at a brewery told an inquest they “wouldn’t have been working there” if they had known the gas was present.

David Chandler, 45, from Bridgnorth, Shropshire, died at Carlsberg in Northampton on 9 November 2016.

His colleague David Beak said Mr Chandler would have “walked off the job” if he had known about the ammonia.

Mr Beak said he had been left emotionally scarred by the incident.

The inquest also heard from Stuart Wright, who had been employed as a sub-contractor for Speedrite International to do the “lift and shift” work of removing a compressor.

He described the moment “grey and white smoke” came out of a valve in pipework surrounding the compressor following a “massive explosion”.

“That was the last time I saw Dave [Chandler],” he told a jury at Northampton’s County Hall.

Later in proceedings, Mr Beak told the inquest how a “big, white cloud” of gas had come out of a valve on the pipework.

He said he could smell the “horrible” ammonia and became blinded when it got into his eyes.

“After a few seconds I managed to get hold of a hand rail and pulled my way round it.”

Mr Beak said he had gone through the first door he had seen and escaped onto the roof.

Under cross-examination from the Chandler family’s lawyer, Karl Hurst, he said he had been taken to hospital following the incident and still suffered from “deep emotional scars”.

He also agreed nobody had warned him or his colleagues to take care around the pipes, and that working in the vicinity of ammonia in such a way was, in retrospect, “terrifying and outrageous”.

The companies working at Carlsberg

Although the ammonia leak happened at the Carlsberg brewery, the work being carried out to remove the compressor was handled by a number of other companies:

Mr Wright had told the inquest how they had planned to move the compressor two days before the incident.

But it had been full of oil, he said, and bits of metal sticking up from the floor were in the way.

Although the oil had been drained by the time they returned, the metal remained, he said.

Mr Wright said he and Mr Bignall had devised a plan to lift the compressor over the metal and onto skates which were in place to move the two-tonne unit away.

They had moved it forward about a foot when it got stuck, he said.

At that stage the pair were joined by Mr Beak and Mr Chandler.

They had, Mr Wright said, decided to push and pull it to get it unstuck, but before they had a chance to do so the gas had leaked out, travelling 50ft across the room they were working in.

The inquest also heard from Craig Needham, who worked for Crowley Carbon – the company overseeing the project.

He said the response from Carlsberg’s control room after the leak was “very nonchalant” with one worker “sat there with his hands behind his head”.

Coroner Philip Barlow has told jurors there was “no dispute” Mr Chandler died “from the inhalation of ammonia”.

He said they would have to consider how the ammonia came to be discharged and how it could have been prevented.

The inquest, set to run until July 3, continues.