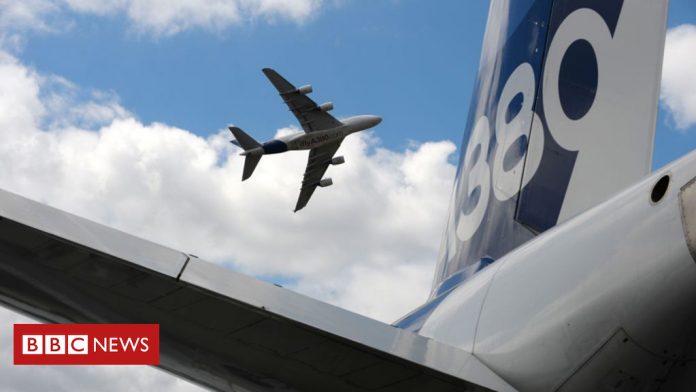 Airbus has warned it could leave the UK if the country exits the European Union single market and customs union without a transition deal.

The European planemaker said the warning was not part of “project fear, but its “dawning reality”.

Airbus employs about 14,000 people at 25 different sites in the UK.

Last week, the outgoing president of the CBI said sections of UK industry faced extinction unless the UK stayed in the EU customs union.

It brings together the EU’s 28 members in a duty-free area, with a common import tariff for non-EU goods.

Prime Minister Theresa May has ruled out staying in the customs union. The UK is due to leave the EU on Friday, 29 March, 2019.

In its Brexit “risk assessment” published on Thursday, Airbus said if the UK left the EU next year without a deal – meaning it left both the single market and customs union immediately and without without any agreed transition – it would “lead to severe disruption and interruption of UK production”.

“This scenario would force Airbus to reconsider its investments in the UK, and its long-term footprint in the country,” it added.

The company, which makes wings for its passenger planes in the UK, also said the current planned transition period which is due to end in December 2020 was too short for it to make changes to its supply chain.

As a result it would “refrain from extending” its UK supplier base. It said it currently had more than 4,000 suppliers in the UK.

Further, without a deal he said Airbus believed the impacts on its UK operations could be “significant”.

“We have sought to highlight our concerns over the past 12 months, without success. Far from Project Fear, this is a dawning reality for Airbus,” he said.

Conservative MP Stephen Crabb said the warning from Airbus should be a “wake-up call”.

Mr Crabb tweeted: “The enormous Airbus factory in North Wales is one of the jewels in the crown of UK manufacturing. This is a wake-up call. A pragmatic, sensible Brexit that protects trade & jobs is vital.”

And shadow Brexit secretary Sir Keir Starmer tweeted: “If proof was needed that the PM’s Brexit red lines need to be abandoned (and fast), this is it.”

The warnings from Airbus echo comments made on Wednesday by the boss of Siemens in the UK.

Jürgen Maier said the UK should should remain in the customs union after Brexit unless there was a “proper alternative”.

Last week, Paul Drechsler, the outgoing president of the CBI, said some parts of industry in the UK faced extinction if the country left the EU customs union.

Paul Drechsler said car firm bosses had come to him saying the industry would suffer unless there was “real frictionless trade”.

Mr Drechsler also said there was “zero evidence” that trade deals outside the EU would provide any economic benefit to Britain.