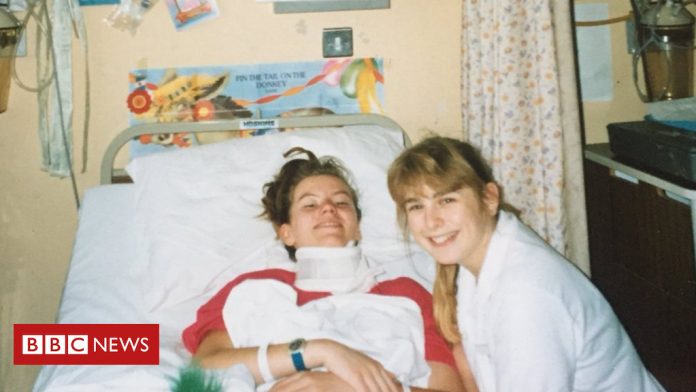 A woman has tracked down the nurse who did “silly things” to make her cancer treatment as a teenager “less painful”, after an appeal on social media.

Her nurse, Debbie Bye, “realised I was struggling” and gave her “silly jobs” which helped her cope, Ms Brown said.

On Wednesday night an “overwhelmed” Mrs Bye got in touch and the pair, who were “both in tears”, plan to meet up soon.

Mrs Bye, 50, said that she “felt really emotional” after finding out about the appeal, after many of her friends sent a BBC article asking her, “Is this you?”

More than 2,000 people had also retweeted Ms Brown’s appeal to trace Mrs Bye and thank the nurse for what she had done.

Thirty years ago Mrs Bye had nursed the 14-year-old teen through aggressive osteoblastoma.

Realising she found being on a children’s ward difficult, she would give the teenager jobs like delivering post to the adult patients and “silly things like that to make it less painful than it could be”, Ms Brown said.

“I often wondered what happened to Lizzy,” said Mrs Bye, who now lives in Dronfield, Derbyshire, and works in a nursery.

“I was there when she was diagnosed. I knew she had been given roughly five years maximum to live and was struggling to walk again.”

Mrs Bye was 21 in the photo of the pair and said that she kept a scrapbook of old pictures of her with patients, but had lost the one of her and Ms Brown.

“I enjoyed my job and did my job to the best I could, but didn’t feel like I had made that much impact on someone that 30 years later they could remember my name – it’s a bit overwhelming,” she added.

“I just tried to make it home from home. We did bobbing apples and went on day trips. We even had nights where we took the kids to nurse’s flats and just had pizza and watched videos.”

Ms Brown, who is now 43, has three children and lives in East Riding, said she was too was “overwhelmed” after their brief conversation on Facebook at about 22:00 BST on Wednesday.

The pair have only written to each other so far, but “we were both in floods of tears”.

“I didn’t realise how important this was to me until now,” she added.

“Debbie inspired me to go on to work with children as a sensory support assistant, and I think everything I have done is down to the way she realised that spirited, rebellious teenager was a real person, no matter what was wrong with her.”