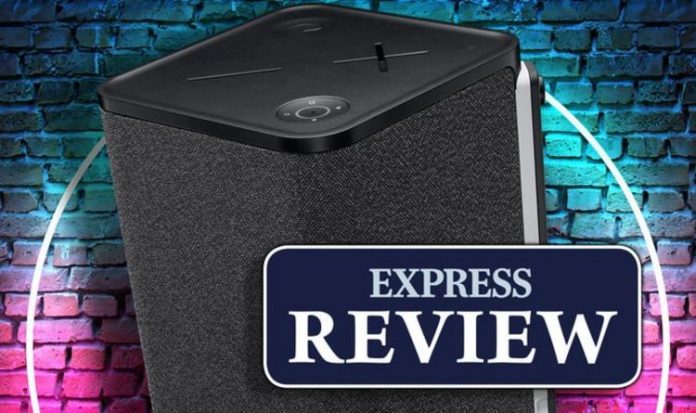 Ultimate Ears (UE) has been knocking our socks off ever since we first heard the UE Boom back in 2014. Now the Logitech-owned audio firm is launching a new wall-shaking speaker that’s very different from anything they’ve released before.

Known as the HYPERBOOM (before you ask, yes, UE insists on the brand name being written out in full capital letters each time) the new speaker has just gone on sale in the UK and unlike the usual affair from UE, this one is far less portable, and much less colourful.

In fact, at first glance, it looks pretty boring, which is certainly not something we’d usually say about anything Ultimate Ears releases.

The HYPERBOOM feels like the UE for grown-ups with the speaker getting a more conservative design designed to fit neatly with your home décor. That’s not to say that the HYPERBOOM can’t be lugged to the beach – it packs a hidden carry handle and mightily impressive 24-hour battery life for roadtrips away from the family living room.

However, with a price of over £300 and weighing-in at 6kg, it’s unlikely you’ll ever want to travel too far with it in your backpack – unless you’re built like The Rock. The HYPERBOOM has been made to offer the ultimate bass-pumping party sound, before returning to the corner of your living room or kitchen to keep the radio – or quiet background music – playing all-year round.

It’s certainly a nice idea. UE says they wanted to create a loud and powerful device but not something that’s used at the New Year’s Eve party and then wheeled back into the garage and covered with a dust sheet for the next 11 months before the next countdown.

That makes a lot of sense. After all, most of us have one or two speakers dotted around the home for day-to-day listening and would like the idea of being able to blast-out our favourite album once or twice a year – at a summer BBQ, a camp-out with friends, pool party, street party, or NYE countdown. And when it comes to these every-so-often events, there’s no question HYPERBOOM will get your (socially distanced) party well and truly started.

Its large box-style design has enabled Ultimate Ears to pack two 4.5” woofers, two 1” tweeters and two 3.5” x 7.5” passive radiators inside its black mesh casing. These are positioned all around the speaker which help it produce a 270-degree sound, so nobody should miss out on the tunes – no matter where they’re standing during your next party.

UE is boasting that all this tech makes HYPERBOOM its loudest and bassiest speaker to date and, having put it through some neighbour-annoying testing, we won’t disagree.

The HYPERBOOM belts out audio at volumes that’ll fill most rooms. And even when your music is cranked up to the max, there’s very little distortion.

We’ve also been playing music at lower volumes and this speaker sounds just as good with audio sounding crystal clear and packed with detail.

Along with great sound, there’s also some other features that are worth mentioning including a dual Bluetooth connection which can switch seamlessly between devices. There’s even two Bluetooth buttons on the top of the speaker with these then fading out the music from one device before switching instantly to the second phone or tablet. It’s a nice feature if you have two people wanting to be the evening’s DJ.

There’s also simple controls for pumping up the volume with UE’s usual giant + and – buttons easily accessible on the top of the speaker.

You can also play, pause, and skip tracks directly from the speaker without reaching for your phone and there’s the option to set up one-touch playlists for easy music control from any streaming platforms you may subscribe to.

A pretty simple app lets you control the volume and upcoming tracks, plus there’s an equaliser setting which allows the sound to be tweaked to your preference. Of course, to power the tunes all night you’ll need to HYPERBOOM to be linked to your phone but don’t worry about your iPhone or Android devices running out of power as this speaker has a USB socket on the rear which can refill any battery. You’ll also find Optical and AUX ports tucked back at the rear of the speaker too.

There’s no question that this is a very good speaker but we can’t help feeling it’s all a bit niche. At £350, Ultimate Ears’ HYPERBOOM isn’t cheap and, unlike all other UE devices, it’s certainly not that portable.

If you want a speaker that can be used all year round and then blast out some tunes at your next party then it ticks all the right boxes.

The fact it can be taken outside – yes, it’s completely rain-proof – is also a bonus, but the design isn’t exactly pretty and there’s also no in-built Alexa or Google Assistants to help you listen to music or set timers via voice control when you’re not using the HYPERBOOM to be the life of the party.

Given that Ultimate Ears has previously included Alexa support in its portable, weatherproof Blast and MegaBlast portable speakers, this seems particularly baffling.

Honestly, the HYPERBOOM has left us feeling a little confused.

In some ways, we love the concept of a groundshaking party speaker that doubles-up as your daily driver in the living room, or kitchen. The weatherproof design, 24-hour battery life, charging ports for phones and tablets, and dual-DJ buttons to let everyone share their favourite track without cutting out the playlist and leaving everyone awkwardly waiting are all great.

We’ve also been impressed at how powerful the HYPERBOOM is and pumping up the volume will definitely have your neighbours knocking on the door.

However, UE has always been about breaking the mould with fun, portable speakers. The HYPERBOOM looks pretty boring in its drab black colour scheme and it’ll make your arm ache if carry it beyond the patio.

On top of that, there’s also no access to Alexa or the Google Assistant, which is a real shame especially as Ultimate Ears wants this speaker to be used all year round.

If you want a party speaker that sounds great, can be moved to any room or used outside, then the HYPERBOOM won’t disappoint. Just make sure you need all of those features in a single product – as there are cheaper ways of getting your next party off with a bang and prettier speakers to have around the house 365 days a year.