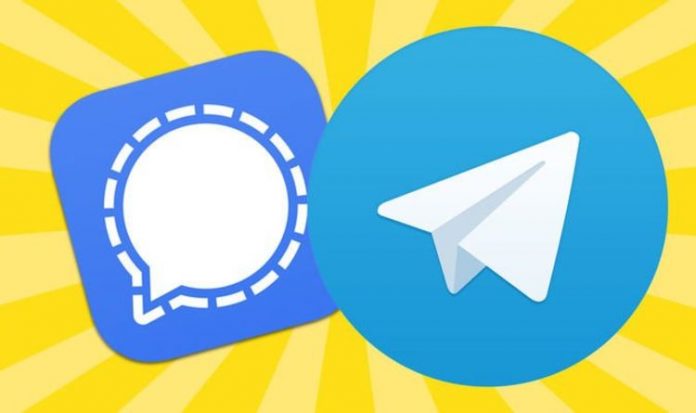 Signal and Telegram are benefiting from a flood of new users – with both privacy-focused messaging apps charging up the charts in iOS and Android app stores. The increase in popularity comes as WhatsApp started notifying users about an updated privacy policy, which users have to accept in order to continue using the app. The deadline for the new Ts and Cs was originally February 8 2021, but this has now been pushed back to May 15.

Initial reports claimed the new terms would see WhatsApp users forced into sharing data with Facebook, which the chat app has since been pouring cold water on.

The messenger has said their data sharing practises haven’t changed, and that the updated terms relate to messaging a business on WhatsApp – which not all users do anyway.

WhatsApp is trying to clear up the “confusion” over their new Ts and Cs, which seems to have spooked some users.

Faced with the updated terms and conditions, WhatsApp users have seemingly flocked to rival services such as Signal and Telegram.

Ahead of the new T&Cs being rolled out to some two billion WhatsApp users worldwide, Signal has suddenly found itself at the top of the charts on the Apple App Store and Google Play Store in multiple regions around the world.

While Telegram has also surged up the charts, with the app now more popular on the UK App Store than WhatsApp, which was previously the most-popular chat app. And new stats have underlined just how much of a meteoric rise both Signal and Telegram are enjoying right now.

According to a post by Business Insider, last week Signal saw a jaw-dropping 4,200 percent increase on its week-on-week download figures. During that period Signal was downloaded 7.5 million times, according to app analytics firm Sensor Tower.

A rep for the research firm said: “From January 6 to January 10, Signal saw approximately 7.5 million installs globally from across the App Store and Google Play”. And it’s not only Signal that’s benefitting. Telegram has also seen its userbase spike by 25 million in the space of just 72 hours.

This has helped Telegram surpass the milestone of 500 million monthly active users. It remains to be seen whether both Signal and Telegram can continue growing its user numbers, or whether this latest wave to rush to these apps is just a brief flirtation away from WhatsApp.

Now, we can’t be sure all of these new Signal and Telegram downloads come from disgruntled WhastApp users. However, a huge number of WhatsApp users have taken to social media to decry the changes to the privacy policy. From that, it’s pretty clear that a significant number of users flocking to Signal and Telegram might’ve once relied on WhatsApp.

One tweeted: “Trying to convince the family & friends to ditch WhatsApp and install signal. It’s a process.”

Another ex-WhatsApp user shared: “Seemed like a headache to ditch WhatsApp but just setting a deadline and deleting it. Signal all the way.”

And one wrote: “Very soon we are going to ditch all Facebook products including WhatsApp. Signal and Telegram all the way.”

And that’s not counting the number of high-profile figures who have called for people to turn their back on Mark Zuckerberg to use privacy-focused app Signal for all their messaging needs. After news of the WhatsApp’s new terms and conditions broke, Tesla and SpaceX CEO Elon Musk tweeted: “Use Signal”.

While NSA whistleblower Edward Snowden followed up with: “That’s @signalapp, for those who don’t speak Elon.”

It is worth pointing out that while WhatsApp had said they aren’t expanding data sharing, Facebook is already able to see some data from WhatsApp users.

For example, when registering for a WhatsApp account, your mobile phone number is sent to the chat app’s parent company.

Facebook is also able to see your mobile device information, including the brand and model of device that you’re using to access WhatsApp.