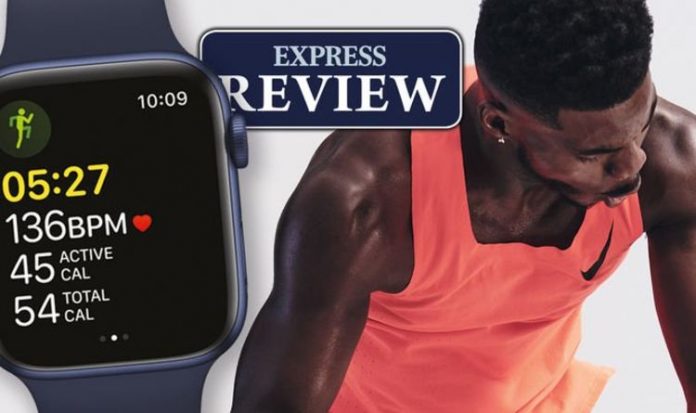 If you’ve been waiting patiently for Apple’s new fitness service to launch then it’s time to dust off those trainers and get ready for some heart-pumping action. Apple Fitness+ arrives on Apple devices from today and promises to get you up off the sofa and motivated into burning some post lockdown and Christmas calories. Of course, Apple is no stranger to fitness tech with its Apple Watch already regarded as one of the best health trackers on the market.

But Fitness+ aims to take things up a level by bringing personal trainers to your phone, tablet or TV to help guide, push and motivate you into hitting new goals and bigger targets.

Like other streaming services, such as Apple Music, Apple Fitness+ isn’t free with it costing £9.99 per month (or £79 a year) for access.

So is it worth paying out for yet another monthly plan on top of all the movie, music and shopping subscriptions you’re most likely signed up to? Express.co.uk Technology Editor David Snelling has been using Apple Fitness+ for the past week and here’s what he thinks.

Apple Fitness – all of your Watch metrics are beamed to the screen (Image: APPLE)

You might be wondering what a journalist who spends hours every day glued to his laptop knows about fitness. To be fair, if I’d been writing this review six months ago I would have agreed with you. However, having put on the dreaded lockdown stone, I decided it was time to get fit and since June I’ve been hitting the gym, pool and local park in bid to get fitter. Almost 6kg has now been removed from waistline but it’s not always been easy to stay motivated or know how hard to push myself.

Having opted not to pay out for a personal trainer, most of my daily physical routine has been made up in my own head and this is where I was really hoping Apple’s Fitness+ would be of serious help.

Although this subscription service goes live today, I’ve been lucky enough to have had access for the past week and there’s certainly plenty to set pulses racing.

Now before I get started let me warm you up with a little guide to the kit you’re going to need to make Fitness+ work.

Firstly, the whole system is built around the Apple Watch with live metrics such as heart rate and calories burned available to view on whichever screen you happen to have in your home or pocket. If you don’t own an Apple Watch, or aren’t considering buying one, then Fitness+ really won’t be for you as this wearable needs to be strapped to your wrist for the best experience.

Next up you’ll need an iPhone or iPad as all the classes are based on you watching the trainers and following their lead.

If you want to view things on the big screen in your living room you’ll also need an Apple TV or new telly from Samsung, Sony or LG which now have Apple’s TV application built-in.

If you have all of this Apple kit already then the £9.99 per month subscription fee seems pretty good value for what you’re then treated to. Even the cheapest gym memberships are likely to cost around £15 per month and don’t include any kind or personal training.

As we’ve come to expect from Apple, Fitness+ offers a really slick experience that’s simple to navigate and really easy to use. Launch this app and you’ll instantly find a swathe of exercises which can all be accessed via a simple tap on the screen. There’s so many to choose from it can be slightly daunting at first but some clever AI soon learns what you love to do based on previous sessions with these activities then appearing when you launch the app. The more you use this, the better it gets.

Apple Fitness can be viewed on your TV, iPad or iPhone (Image: APPLE)

As part of Fitness+, you’ll find cycling, treadmill and rowing workouts with varying levels of difficulty and session length. But don’t worry if you don’t have any equipment or a gym membership as there’s plenty of classes, such as Dance, Core, Strength and HIIT, which simply need your body, a bit motivation and nothing else.

Along with choosing your favourite exercise types you can also narrow things down by the trainer. Apple has enlisted a team of top experts from both the US and UK and you can pick your workout based on these enthusiastic faces. It’s a nice touch as it means you can easily view sessions with the trainers that you prefer working with.

Favourite classes can also be saved and watched as many times as you like and Apple says that new videos will be added every week.

We’ve tried numerous sessions both at home and in the gym, and they’re perfect for motivating and pushing you to a place where you may not have gone before. The trainers will push you without being too aggressive and it’s amazing how much further you’ll go with a little encouragement. The on-screen metrics also reveal how well you are doing and how much longer you have left before you can stop.

You can even control everything from the Apple Watch with this device automatically connecting when you start a workout then allowing you to pause or end the session without going near your iPhone, iPad or TV.

Apple Fitness also helps to cool you down after a workout (Image: APPLE)

If do have a gym membership then Fitness+ also works well as a companion during your visits.

All videos can be download onto your phone or tablet so you can take the trainer with you without using any data or needing to connect to Wi-Fi.

I tested a few treadmill and bike sessions and they certainly push you to try new things. Weirdly, the 30-minute slog also felt so much easier with the instructor helping you along. It’s strange but you really do feel part of a team as you take part.

One thing that is worth noting is Fitness+ doesn’t link to the machine you are using so when the trainer wants you to run faster or set the incline higher you have to do this manually – maybe Apple will work out a way of introducing this in the future.

Another thing to motivate you is the Burn Bar which shows how you doing compared to others who have taken part in the session you are doing. It’s a nice way of checking to see if you are pushing yourself enough and adds a bit of competition to your workouts although it can be removed if it’s not helping you.

One final thing to help you moving are the tunes that belt out from Apple Music. With songs pre-loaded you don’t need to run any separate audio as you workout. These tracks are all played without needing an Apple Music subscription but if you do subscribe then you can instantly add any songs you like in Fitness+ to your favourite playlists.

What I like about Fitness+ is that it seems to offer something for everyone. If you’re new to exercise then there’s plenty of ways to get started with it catering for all ability levels and it never makes you feel stupid for not being able to keep up.

Along with sweaty HIIT classes, heart-pumping Dance sessions and pounding away on the treadmill you can also find some less intense workouts with Yoga and Mindfulness cooldowns a very welcomed addition.

My only minor niggle with Fitness+ is that it would be great if the gym machines could speed up and slow down in real-time to the workout you’re watching and you’ll obviously need a house full of Apple kit before you’ll get the best out of it.

If you already own an Apple Watch or are thinking of investing then Fitness+ is a great companion to help you get a bit fitter.

Of course, you will have to pay to £9.99 per month for the privilege but Apple is offering one month free to everyone or 3 months free if you’ve just bought a new Apple Watch.

It’s certainly worth giving it a go and could be a really useful tool after the Christmas and New Year binge.