A study came out years ago showing that certain infomercial devices activated the core better than traditional situps. What did I do? Ignored it, of course—after all, it was infomercial stuff. The problem was, the study appeared in the Journal of the American Physical Therapy Association, which is a pretty big deal. So I researched and found that all the infomercial gadgets that scored higher than the situp were basic versions of the ab wheel rollout or plank. Then, a study came out showing that a group in the military that focused on planks and side planks outperformed a group that focused on situps—in a situp test!

It became clear to me that various forms of stabilization, not traditional abs exercises, are the key to developing stronger abs. Read on, and I’ll share what I’ve discovered about how your midsection really works and the way you need to train it.

The primary purpose of the core—the muscles of the abdomen, including the abs, lower back, and lats—is not to flex the spine, as in crunches and situps, but to stabilize it, preventing the spine from moving. Stuart McGill, a leading expert on lower-back pain, has repeatedly shown that you can work your core more intensely with stability training than with traditional flexion exercises. It’s also safer, because flexing the lumbar spine is the exact same action that can ultimately lead to disc herniation. Let me be 100% clear: I believe so strongly in training stabilization over flexion that I don’t have my clients do any situp or crunch variations anymore. At my training facility, we’ve further broken down core work into three distinct categories:

1. PURE STABILIZATION TRAINING
The goal here is just to keep your spine straight, so it’s as simple as holding a plank, or side plank, for time. Progressions would include elevating the feet, reducing the base of support (try raising one elbow and the opposite foot off the floor), introducing instability (such as resting your elbows on a Swiss ball), or holding for a longer time.

2. DYNAMIC STABILIZATION
This is a bit of a misnomer, since dynamic means “moving” and stabilization means “don’t move.” But it also may best describe the true purpose of the core: to stabilize the spine while the extremities are moving. Sample exercises are a front plank with pulldown combo (get into a plank in front of a low cable pulley or resistance band, and pull the handle toward you), ab wheel rollout, mountain climber, and half-kneeling cable chop.

The goal is always to allow zero movement in the spine or core. The core muscles have to control the forces from the extremities and stabilize accordingly. With mountain climbers, for instance, there can be no lumbar flexion at all (the lower back cannot round, a common problem).

3. INTEGRATED STABILIZATION
This is where we do traditional exercises with a twist—for example, using one dumbbell instead of two in a lunge or shoulder press. Basically, we off set the center of gravity and force the core to work harder than it would with a traditional exercise. Sample movements would be suitcase walks (a farmer’s walk, like strongmen do, but holding only one dumbbell), Turkish getups, and various lunges and presses with uneven loads (one heavier dumbbell in one hand or weight on one side and not the other).

That’s it. Designing your core workouts with exercises that fit these categories is an effective way to strengthen your abs and build an injury-resistant lower back. They can be used as a single progression—one month you could focus only on pure stabilization, work on dynamic movements the next month, and then finally do integrated stabilization exercises the month after—or as a separate focus on each of your training days. I recommend doing all core exercises, except the ones in the integrated stabilization category, at the start of your workouts before you train other muscle groups. 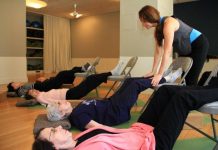