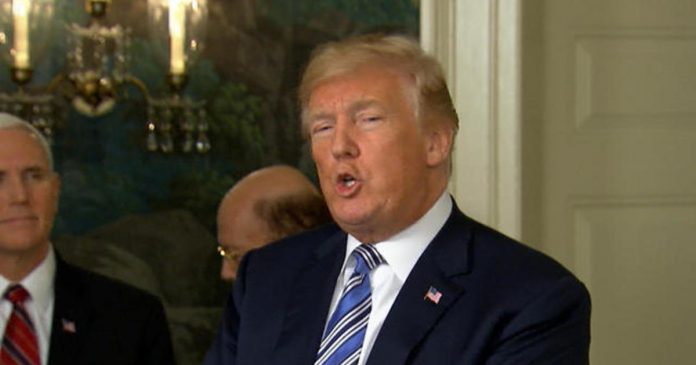 What’s the White House’s word worth?

Days of conflicting and misleading statements from President Trump and his top aides have fueled new questions about the White House’s credibility, sowing mistrust and instability within the West Wing and leaving some congressional Republicans wondering if they have a good faith negotiating partner in the president.

One former congressional GOP leadership aide said it was becoming impossible for Republicans to negotiate anything with White House officials, given the president’s willingness to undermine his own team’s public and private assurances. In turn, White House officials have found themselves in the bizarre position of urging lawmakers to ignore some of the president’s own statements.

That was the case on Friday, when Mr. Trump blasted out a morning tweet threatening to veto a massive government spending bill that the White House had guaranteed lawmakers and the public that he would sign. White House officials privately insisted the president was simply venting after watching news coverage that cast the deal as a defeat for several of his priorities. After hours of uncertainty, Mr. Trump’s veto threat crumbled, and he ultimately signed the legislation.

Still, it left some Republicans rattled.

“The spontaneity and lack of impulse control are areas of concern for lots of members on both sides of the aisle,” said Rep. Charlie Dent, a Pennsylvania Republican who has been critical of the president. “Disorder, chaos, instability, uncertainty, intemperate statements are not conservative virtues in my opinion.”

Trent Lott, the former Republican Senate majority leader from Mississippi, said GOP lawmakers “feel a good deal of consternation” about the White House-induced whiplash. But he added: “I assume there was method in what the president did.”

Members of both parties said they were troubled that Mr. Trump seems oblivious to how he has undermined his own clout and agenda by staking out positions and then brazenly abandoning them. Where legislators once might have attributed such missteps to the president’s newness to Washington and its ways, not anymore.

Mr. Trump’s vacillating on the spending bill was just one in a series of recent instances that put the credibility of the White House’s words under a microscope. Earlier this month, Mr. Trump bragged at a private fundraiser about having made up facts on trade during a conversation with Canadian Prime Minister Justin Trudeau. And in recent days, he and his staff have issued stern denials about the prospects of national security adviser H.R. McMaster departing the White House and a potential shake-up on the legal team that handles Trump’s role in the special counsel investigation into Russian election interference and obstruction of justice. Beyond public statements, White House chief of staff John Kelly had privately assured his staff that no shakeup was on the horizon.

By week’s end, McMaster was out. And the legal team had lost one attorney and appeared to be looking for another one.

Trump’s trouble with the truth is hardly new. He frequently mangles the facts on everything from the size of his inauguration crowd to the scope of the tax bill he signed late last year. And as his boasting about his interaction with Trudeau underscored, the president rarely appears to be embarrassed or ashamed about repeating statements that have been proven false.

“There’s a fundamental difference between this White House and those of the modern era that preceded it,” said Timothy Naftali, a historian and the former director of Richard Nixon’s presidential library. “It doesn’t care about its credibility outside of a narrow swath of the American people.”

Numerous polls show a majority of Americans don’t believe Mr. Trump is truthful, including a recent Quinnipiac survey in which 57 percent said the president was not honest. Mr. Trump’s backers sometimes point to the fact that he was elected even though polls during the campaign showed similar results.

Mr. Trump’s willingness to skirt the truth has frequently put his advisers in the awkward position of issuing strong statements in public that are quickly undermined by the president. White House press secretary Sarah Huckabee Sanders repeatedly batted down reports about McMaster’s ouster in the days leading up to Mr. Trump’s announcement that he was bringing in a new national security adviser.

And on the eve of Trump’s spending bill veto threat, budget director Mick Mulvaney left no ambiguity about the president’s plans to validate the measure.

“Let’s cut right to the chase. Is the president going to sign the bill? Yes. Why? Because it funds his priorities,” Mulvaney said.

White House officials privately contend that they are often left in an impossible situation given Mr. Trump’s willingness to change his mind. Even if their statements are true at the time, they say, there’s no guarantee the president’s position will hold.

Peter Wehner, who served in the administrations of Presidents Ronald Reagan, George H.W. Bush and George W. Bush, said Trump ultimately has no one to blame but himself.

“He doesn’t even know what his own stance is,” said Wehner, a frequent Trump critic. “It just devalues his word and his threats and promises and his presidency.”