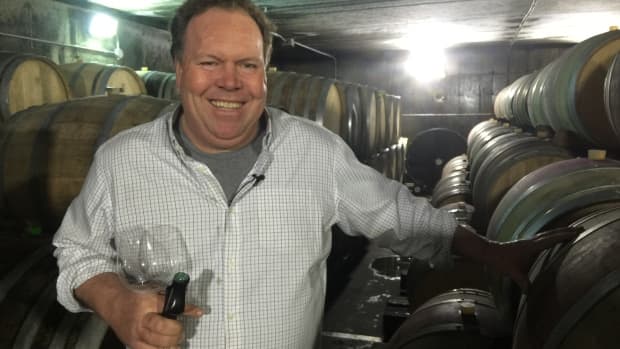 A Prince Edward County winemaker says she’s hopeful that the industry won’t be impacted by accusations of sexual misconduct against one of the giants in her business, but that it’s too soon to know what the fallout will be.

On Wednesday, The Globe and Mail published an investigation alleging a “pattern of alleged sexual advances and sexual harassment” against Norman Hardie, the founder of an esteemed winery and vineyard who has been credited for putting Prince Edward County on the map as a Canadian wine destination.

CBC News has not independently verified any such claims.

But the alleged revelations have sent ripples through Ontario’s winemaking industry, according to Vicki Samaras, co-founder of the Hinterland Wine Company.

‘We all just looked at each other’

Samaras said she was having lunch with some colleagues, winemakers from the Niagara region, on Wednesday, when text messages and phone calls started pouring in about the story.

“Literally, we stopped eating and started reading the article and then we all just looked at each other,” she told CBC Radio’s Here and Now. “We were very upset.”

He would comment on how I’d look in certain clothing, comment on my breasts.– Vickie Samaras, co-founder of Hinterland Wine Company

Hinterland Wine Company is located just minutes away from Hardie’s winery and Samaras says she’s known Hardie for many years. The pair met after Samaras introduced herself and quickly became fast friends, with Hardie happy to lend support to what was technically a competing wine company, often sending business her way, always kind and always giving.

But while Samaras says she considered herself an equal with Hardie, she’s no stranger to the casual remarks about her body or dress by Hardie, which she says she deflected — something she appreciates may not have been so easy for those who may not have enjoyed the same status.

Hardie’s winery had an impeccable reputation, she said. If he recommended someone as a potential employee, that recommendation carried weight.

‘We didn’t see how deep this went’

“We didn’t see how deep this went,” she said. “Norm has had a reputation for being a ladies’ man; sometimes he says inappropriate things.

Prince Charles, centre, seen with Norman Hardie, left, during a visit to Hardie’s winery in Wellington, Ont. in June of 2017. (Lars Hagberg/Canadian Press)

“The problem is this: it’s said in such a casual way that you think in that moment as a woman, how should I react? Do I stand up and say, ‘That is completely wrong! I don’t want you speaking to me this way. You’re objectifying me, you’re making me uncomfortable?'”

Her collegial relationship with Hardie, said Samaras, made it hard to confront him on comments she found uncomfortable.

“It’s tough, because he sends you business, he’s good to you, he’s good to your family, he’s great with our sons, he supports us, generosity —you have to weigh that as a person. You think, ‘Did he really mean that? He was drinking a lot of wine.'”

In a statement on his website Wednesday, Hardie apologized for “behaviour and language I viewed at the time as harmless or good-natured [that] was anything but,” saying his position of power “almost certainly explains” why it took years for him to be confronted.

“Reading the stories of these women and how my behaviour impacted them has made me deeply ashamed. To all those who felt marginalized, demeaned or objectified while working for or alongside me, I am truly very sorry.”

Hardie acknowledges many of the allegations against him are true, but says some are not.

The winery exports internationally, including to the U.S., Japan, Hong Kong and the U.K. (Taylor Simmons/CBC)

The statement goes on to say that he was approached by a colleague years ago expressing “concern” about the work environment and was “told that the socializing and overly-familiar bantering” needed to stop.

“I took this to heart and have since worked hard to change my behaviour. But I clearly have much more work to do,” he said, adding that the winery has begun implementing recommendations from an independent workplace review and that he is committed to continuing to make progress on that front.

For her part, Samaras says she felt compelled to speak out because she heard from several of Hardie’s former employees over the past 24 hours and “from people who are too scared to talk.”

“I thought, ‘Wait a minute, why am I not saying something? As a woman, as an employee in this industry, we need to make positive change.”