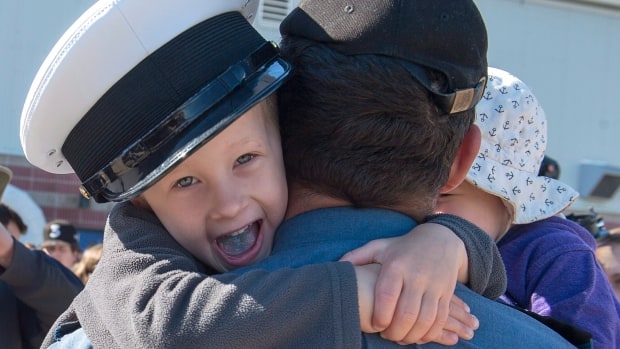 About a dozen uniformed sailors stood atop the navy submarine HMCS Windsor on Wednesday as it glided through sparkling blue water toward Halifax’s naval base following a nearly five-month deployment in the Mediterranean.

Friends and family held ‘Welcome Home’ signs and waved excitedly from a jetty at HMC Dockyard under sunny skies, eager to greet the 59-member crew of the Victoria-class submarine.

Leading Seaman Ian Jacobson was first off the Windsor and was met by his fiancée, Jessica Chapman, and their two five-year-old daughters, Abbie and Brailynn. 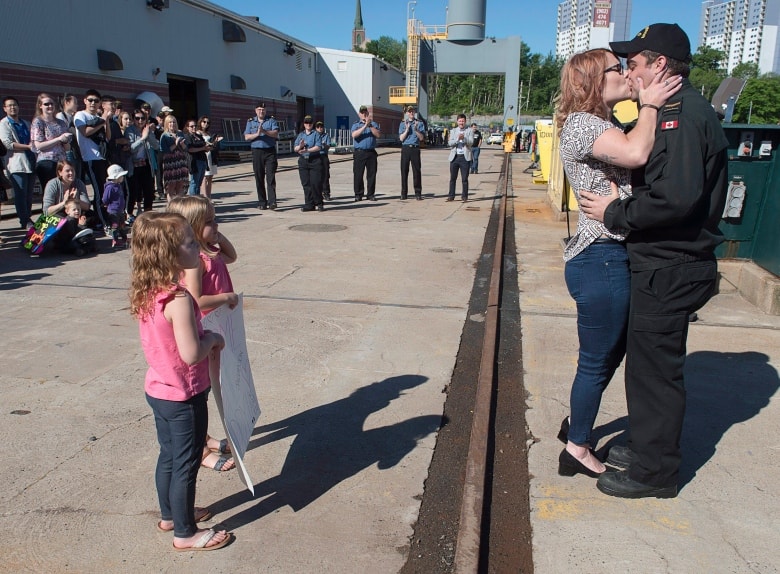 Leading Seaman Ian Jacobson, selected to be the first off the boat, kisses fiancée Jessica Chapman as their children, Abbie and Brailynn, look on. (Andrew Vaughan/Canadian Press)

Jacobson said it was surreal seeing his family after 133 days on the submarine, which was sometimes 57 metres below the surface.

“I still can’t believe it. It feels great to be home,” said Jacobson, cradling one of his daughters in his arms.

The submarine was on patrol as part of Operation Projection, conducting training exercises with navies and other international security partners. 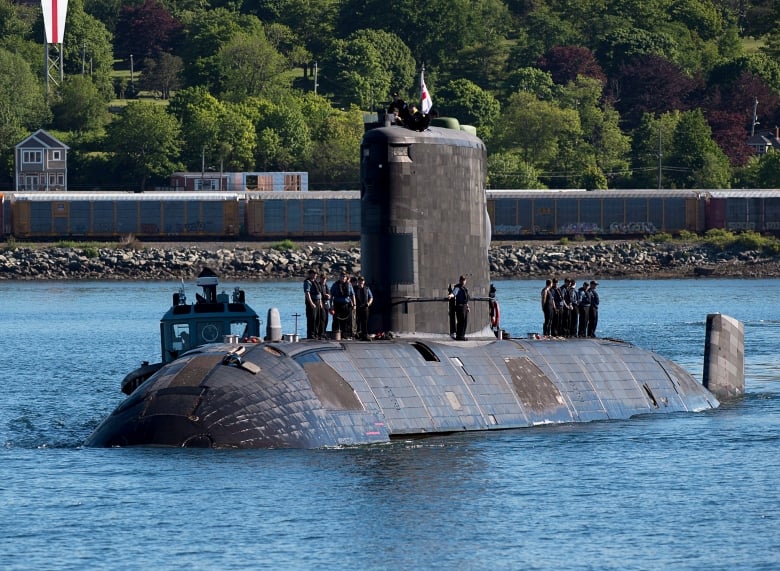 In March, HMCS Windsor participated in a NATO anti-submarine warfare exercise with submarines from Greece, Italy, Spain, Turkey and the United States.

It was Cmdr. Peter Chu’s final deployment as commanding officer of the submarine after four years at the helm. Chu said working on the Windsor was both rewarding and challenging.

“It was probably the best job I’ve ever had in my entire life,” said Chu, who is leaving his post to take on a new role. 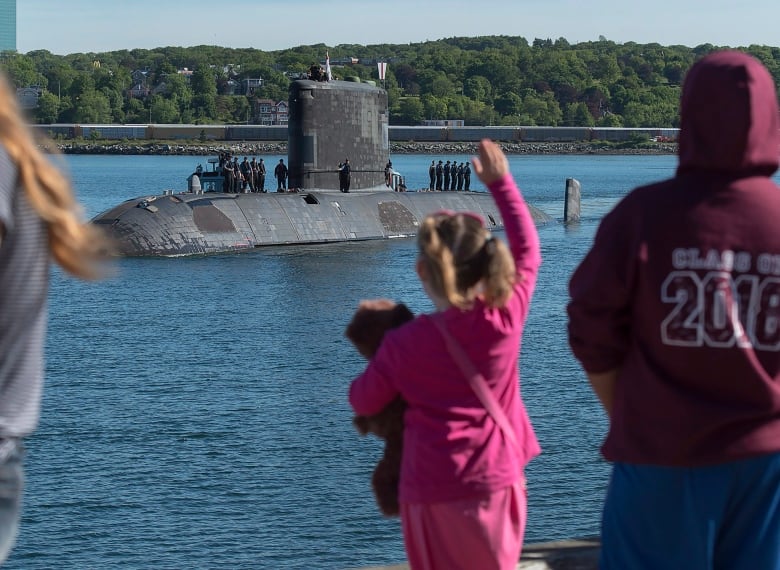 Family and friends greet HMCS Windsor, one of Canada’s Victoria-class long range patrol submarines, as it returns to port in Halifax on Wednesday. (Andrew Vaughan/Canadian Press)

Lt.-Cmdr. William Matheson took over as commanding officer for the last few weeks of the deployment. He said the exercises taught Canada’s navy about “what’s required to operate in such a dynamic theatre as the Mediterranean.”

“It’s a very busy area of the world with respect to traffic, and when you operate in and around all those nations with NATO itself, you have to be able to interact and have good interoperability with all the other nations to achieve what you need to achieve,” said Matheson.

Matheson said there were no issues with the submarine during the deployment, besides the “standard operating issues we encountered on a daily basis.” 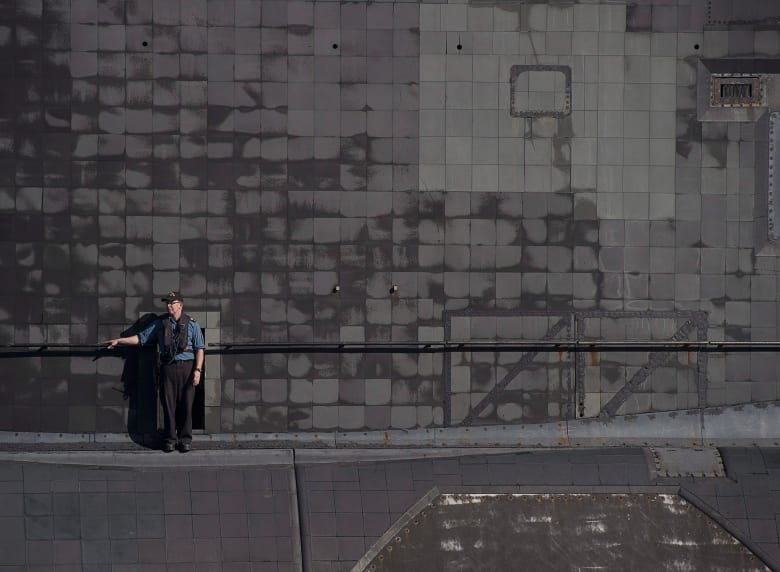 A sailor stands at the base of the conning tower on HMCS Windsor, one of Canada’s Victoria-class long range patrol submarines, as it returns to port in Halifax. (Andrew Vaughan/Canadian Press)

Canada’s four long-range, diesel-electric submarines were purchased from Britain’s Royal Navy in 1998 for $750 million, but the transition to full Canadian navy operations has not been smooth.

There have been years of setbacks and challenges, including a fire aboard HMCS Chicoutimi in 2004 that killed Lt. Chris Saunders and sent two others to hospital during its first Canadian voyage.

The ships have also required frequent repairs and upgrades.

Defence sources have told The Canadian Press that the Trudeau government is planning to spend upwards of $2.5 billion more on the submarines to keep them operating into the 2030s. 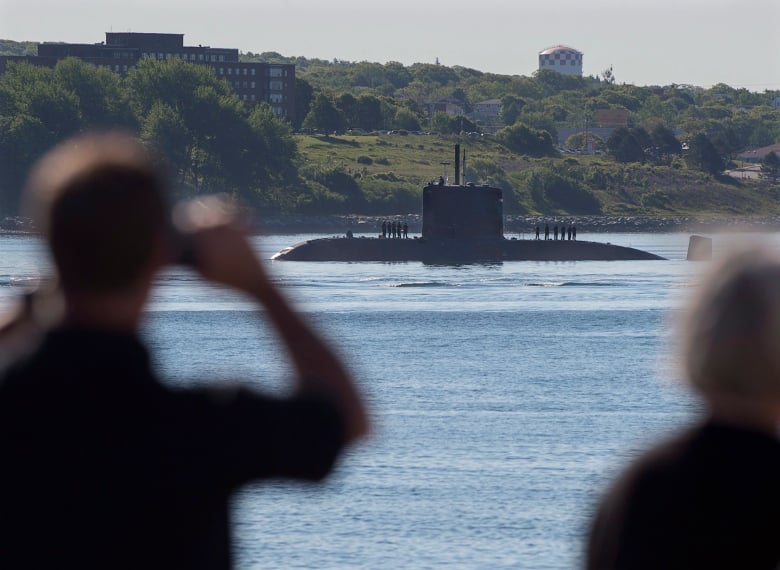 HMCS Windsor was on patrol as part of Operation Projection, conducting training exercises with navies and other international security partners. (Andrew Vaughan/Canadian Press)

Chicoutimi, based out of CFB Esquimalt in B.C., recently returned from 200-day deployment in the Asia-Pacific region. HMCS Victoria and HMCS Corner Brook, also based at CFB Esquimalt, are currently being serviced.