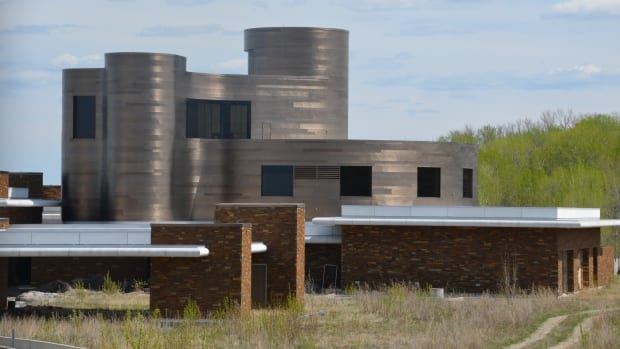 It was to feature waterfalls, an art gallery, golf course and an enormous boathouse and at 65-thousand square feet it was to be the largest house in Canada.

But over a decade later, it has never been finished or lived in.

“So now it’s probably our biggest eyesore,” says Temiskaming Shores Mayor Carman Kidd who can see it out his window at city hall.

“People think about what it could have been when it was finished.”

A few years later it was purchased by a Toronto-area company that could not be reached for comment.

Mayor Kidd says the current owners have done little other than put up security cameras.

He says the owners also didn’t pay property taxes for three years and the municipality put the property up for a tax sale last fall.

“About the last hour before it was sold off for taxes, they actually came forward with a cheque to pay the back taxes, so they own it free and clear again and we’ll see whether they continue to keep the taxes paid or if we put it up for tax sale again in three years time,” says Kidd, adding that the unpaid taxes totalled $150,000.

He says that building is also sitting on much coveted waterfront property on Lake Temiskaming and is also falling into disrepair.

“A building with so much potential and now it’s just decaying, is the biggest problem,” he says.