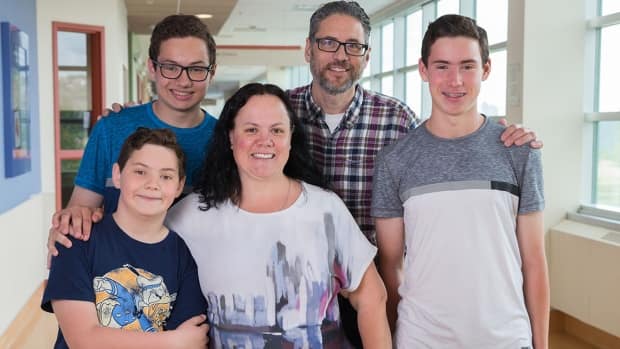 One Calgary family has come up with an innovative way to spark their children’s interest in science and technology.

They volunteer them to participate in scientific research studies at the University of Calgary.

Dad Darren Floer, and two (of his three) teenage sons, 15-year-old Joseph and 14-year-old Santi, spoke to the Calgary Eyeopener on Wednesday about what it’s like to get in on the ground floor of some of the university’s cutting edge scientific research.

That means everything from trying to control a remote control car with their brains, wearing smartwatches for a week to track their activity levels and sleep patterns, performing tasks inside an MRI machine, to playing computer games inside high-tech robots.

“We took them to different things. They didn’t have any choice.

“We thought it was beneficial for science, for research.

“And now they do it on their own.” 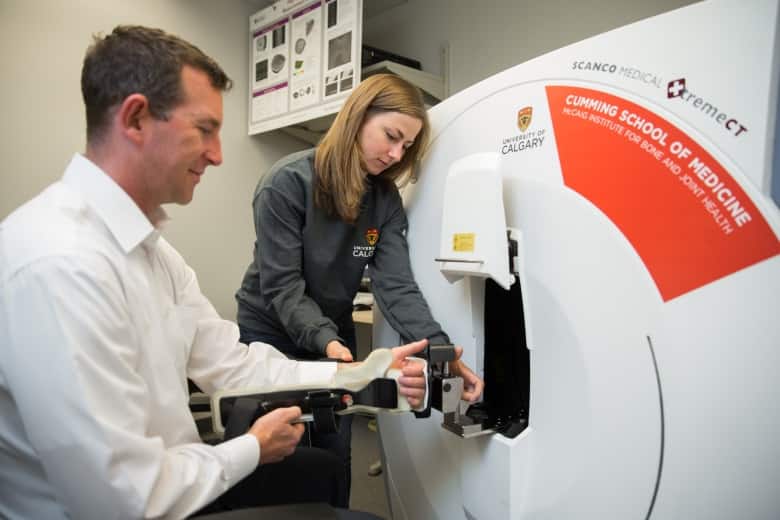 James Tomasson has his wrist scanned by Danielle Whittier, a grad student in Steven Boyd’s bone imaging lab, demonstrating the sort of research that uses volunteers. (Adrian Shellard/University of Calgary)

Joseph said the most interesting study he’s been involved with literally involved mind over matter.

“We did one where we had to control a remote control car using our brain, so we were hooked up to some kind of headset that would monitor our brainwaves. We had to try and think of something, and then that kind of command would be associated with going forward, and then they’d kind of calibrate it — so then we’d have to think about that and that’s how we would move it,” he said.

“It was hard, but it was interesting.”

For Santi, the project that really grabbed him involved a robot, a sheet and some paddles.

“We did one where we were hooked up to some robot thing. And they would put a sheet over your hands, which were on some paddles.… You’d have to do different tasks without being able to see your hands.”

Sparking an interest in science

Joseph doesn’t know whether participating in a dozen research projects sparked his interest in science or confirmed it.

“I’ve always been interested in science and medicine and stuff like that. But I guess it has had some influence, yeah,” he said.

What started out as dad-driven, however, has turned very much into a kid-driven fascination — which is fine by Darren.

“With this registry, we have an option for our commitment. We can be involved as often as we want. They can notify us for various studies. We put it up to the boys. If there’s something they don’t want to take part in, they’re free to say no,” Darren said.

Anyone can sign up to participate in U of C research requiring volunteers. Just don’t expect to get rich doing it.

“Some studies give you a gift card or something, $20,” said Santi.

If that’s not enough, there’s also scientific research swag, which is swag unlike any other.

“We’ve got pictures of their brains at home from studies,” Darren said. “We get test results.

“And they get the satisfaction of doing it.”