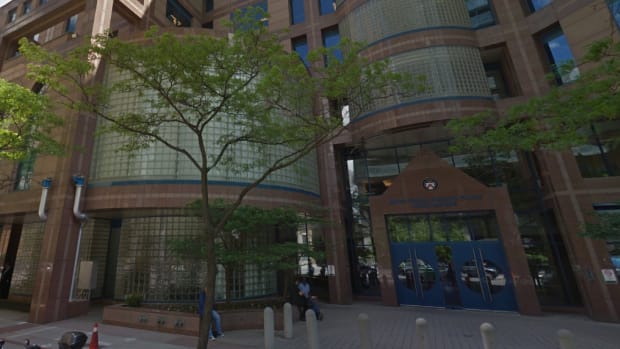 Toronto police are reviewing a decision by an Ontario Superior Court judge that says searching members of the public in order for them to attend police board meetings violates their Charter right to freedom of expression.

Toronto Police Chief Mark Saunders implemented a policy last June that requires everyone who enters police headquarters, at 40 College Street, to submit to a search. That search involves a sweep by a metal detecting wand and a manual search of any bags, and anyone who refuses to be searched is not permitted to enter the building.

Kristian Langenfeld, who regularly attends Toronto Police Services Board (TPSB) meetings, argued the policy — when it serves as a condition to attend TPSB meetings, which are held at headquarters — violates the right to freedom of expression under the Charter of Rights and Freedoms.

The effect of the searches is to limit expression by making public access to TPSB meetings contingent on submitting to a warrantless search.– Justice Jill Copeland, Ontario Superior Court

In her decision, Copeland notes Saunders argued the searches don’t infringe on Charter rights because the act of attending a meeting “does not have expressive content.”

Saunders also noted that individuals can watch TPSB meetings via video and make submissions remotely, Copeland wrote. According to the chief, “if the applicant’s freedom of expression was infringed, the infringement did not result from government action, but from the applicant’s choice not to submit to a search,” Copeland wrote.

“I reject each of these arguments,” Copeland continues.

“I find that the searches as a condition precedent to attending a public TPSB meeting infringe the applicant’s freedom of expression.”

The right to attend such meetings and be informed about the activities of a government agency via a public meeting “has expressive content,” whether or not the attendee plans to speak, and is protected by the Charter, Copeland stated.

Saunders’s intention with the search policy was not to limit political expression, Copeland wrote. “However, the effect of the searches is to limit expression by making public access to TPSB meetings contingent on submitting to a warrantless search.”

Last October, a number of community activists called for police board meetings to be moved to city hall over similar issues.

In her decision, Copeland said Saunders also made submissions arguing that the Occupiers’ Liability Act (OLA) and the Occupational Health and Safety Act gave him authority to impose searches upon entry to headquarters, including prior to attending a TPSB meeting.

Copeland rejected those arguments, writing that although the OLA may give the Chief the right to impose searches on anyone attending headquarters for business other than a board meeting, the legislation doesn’t allow a government occupier of a property the authority to impose warrantless searches, without reasonable and probable grounds or reasonable suspicion, as a condition to attending a public meeting of a government agency.

It was not immediately clear how the decision will affect the search policy. Asked for the Chief’s reaction to the decision, a spokesperson for the Toronto Police Service did not answer specific questions about whether searches will continue or cease, or whether provisions will be put in place for those attending TPSB meetings.

“The Service is carefully reviewing the decision and will make any changes that are appropriate,” Meaghan Gray told CBC Toronto in an email.

“No final decision has yet been made on an appeal.”