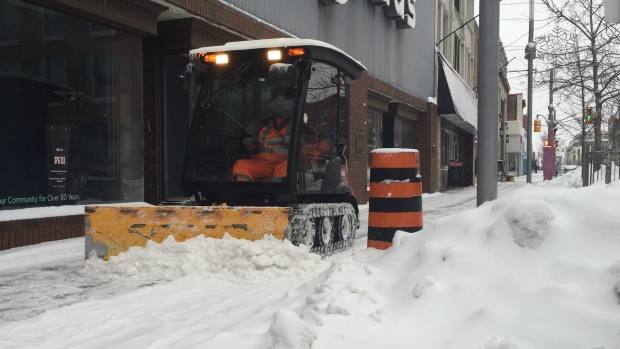 It feels like summer outside, but inside Kitchener City Hall Monday, council and staff approved a number of recommendations in relation to the city’s snow removal.

The report makes a number of recommendations for changes to this upcoming winter’s snow removal practices by the city.

Some of the recommendations from staff include:

Colleen Collins, a spokesperson for the city, said the recommendations were approved by committee and will go to council next week for ratification.

“If approved, staff will work out some of the outstanding details over the next few months and will start the test programs this winter season,” she said.

Aaron McCrimmon-Jones, the transportation planning project manager for the city, says the changes would be monitored over the winter months.

That way they can “evaluate them and collect data on them and understand what level of public support exists for each of those new components,” he said.

‘A wide range of viewpoints’

“This is a topic with high public interest and it brings a wide range of viewpoints and opinions about what role the city should play when it comes to clearing snow and ice from sidewalks,” McCrimmon-Jones said, which is why they want to try out a few ideas this winter.

The changes are also being suggested because in May, the province changed the mandated standards. Each municipality must follow them when it comes to clearing sidewalks of snow.

Currently, the city clears 216 km of sidewalk. Property owners are responsible for their own sidewalks and downtown Kitchener sees elevated sidewalk clearing because the businesses pay for it, McCrimmon-Jones said.

Kitchener Mayor Berry Vrbanovic said he’s heard from residents about the conditions of sidewalks in the winter months.

“There’s admittedly a variety of viewpoints on this issue, but what we are hearing is this issue of accessibility and mobility for everyone — from older adults to those with disabilities to those who want to walk more or walk around with their child in a baby carriage — this is an important issue and one that council needs to look at how we address,” he said in an interview after the committee agreed to move forward with the staff recommendations on Monday.

“What’s important here is when we’re talking about issues of accessibility and mobility, it’s not an issue that is as simple as looking at a survey,” he added.

“It really is a moral issue about how we view all of our citizens in trying to make sure they can be able to move around in our community as effectively as possible.”