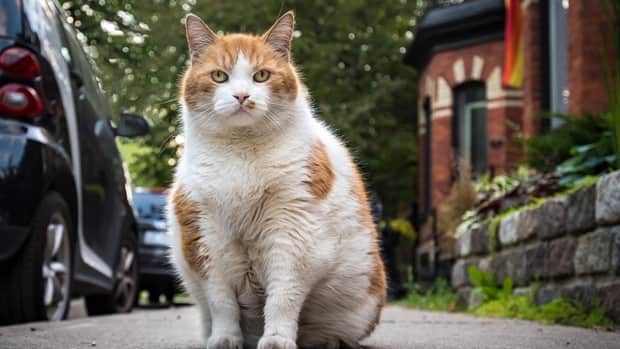 Two cat themed-parks will soon adorn the Wellington Street West and Draper Street neighbourhood, but their creation means popular nightclub The Addisons Residence will be demolished in the coming years.

The new parks are part of the 7.8 acre development, The Well — a mixed-use community with condos, office space and greenery. 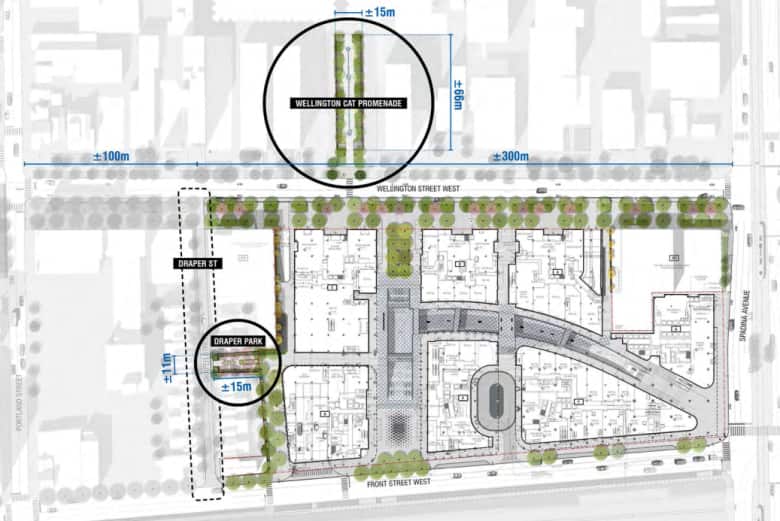 The map outlines The Well development, as well as circling the two cat-themed parks planned for the neighbourhood. The Wellington ‘Cat Promenade’ will take the place of popular nightclub, The Addisons Residence. (City of Toronto)

According to Coun. Joe Cressy, who represents Ward 20, Trinity-Spadina, the parks will provide much-needed green space for the thousands of new people expected to live and work in the area.

“When a developer builds a condo, under the planning act they’re required to provide parkland, but far too often, rather than take parkland, we accept cash in lieu,” he said.

“In this case, we approached it differently. We said to the developer, ‘If you’re not going to provide us with parkland onsite, purchase a piece of property nearby.'”

The deal puts the onus on the developer to design and build the parks, after they’ve been vetted by the city.

Claude Cormier + Associés is the landscape architect firm working with The Well.

Their inspiration for the parks came from a local feline, Dizzy, who architect Claude Cormier often noticed on his visits to the site. 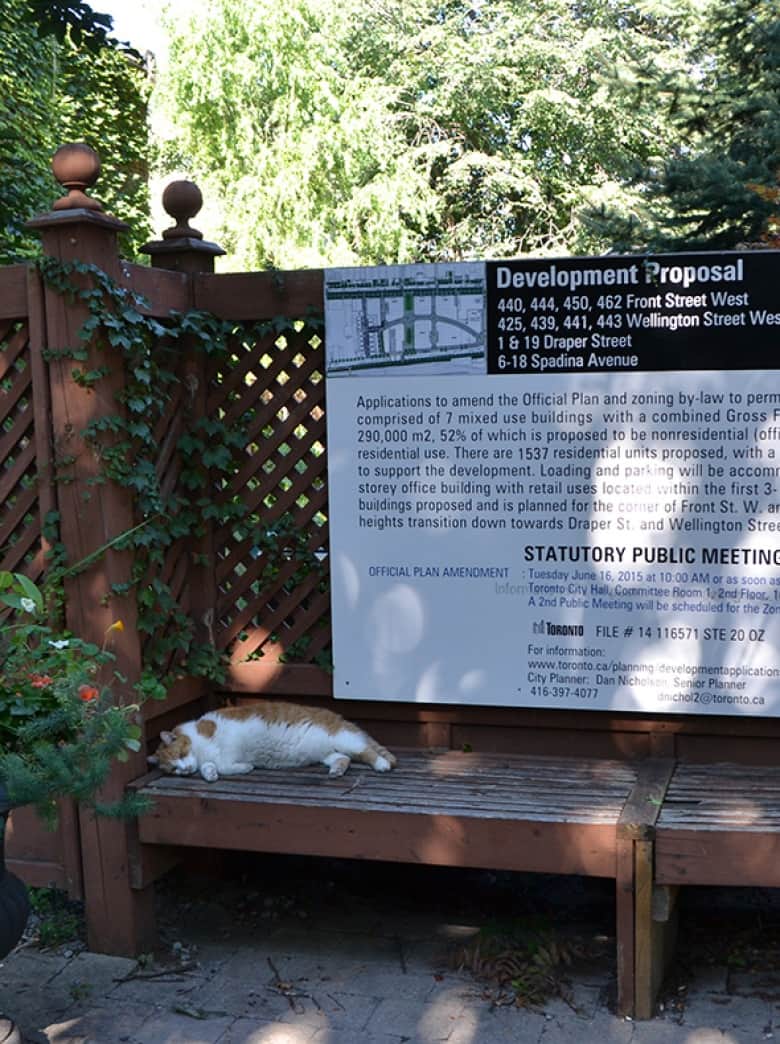 Claude Cormier says he saw Dizzy the cat during visit after visit to the Draper Street area, and so, he decided to honour him in the creation of these two parks. (Claude Cormier + Associés)

“We happened to always see the same cat on Draper Street hanging out in that little parkette,” Cormier said. “He’s a very nice, friendly cat, and for years, he’s always hanging out on that bench.”

Cormier is also behind the recent dog park and fountain in Berczy Park, about a kilometre away, and he thought cat-themed parks would complement the work. 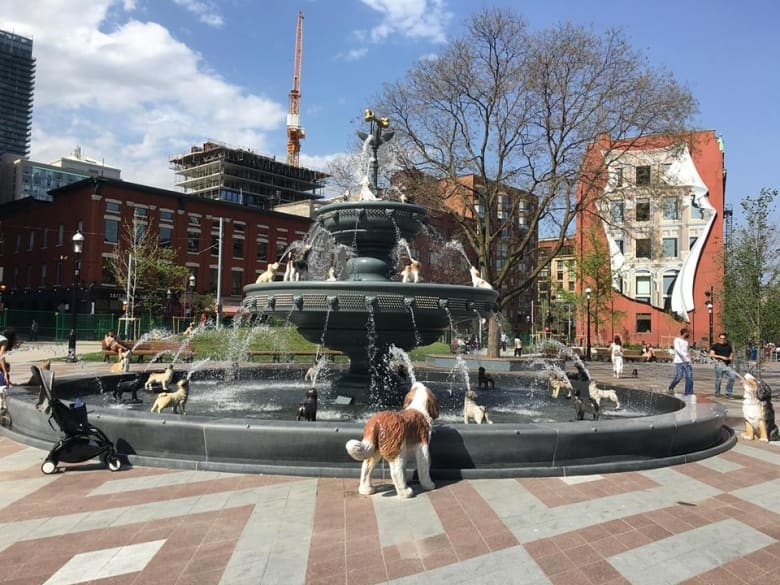 Berczy Park reopened last year after the addition of a whimsical dog fountain, complete with troughs for furry passersby to drink from. (Martin Trainor/CBC)

Both parks will, of course, pay tribute to Dizzy.

The Wellington Street West site is expected to be more than 1,000 square metres, although Cressy says they’re trying to expand it to an adjacent parking lot, which would add another 700 square metres.

The park will include two large statues standing guard at both ends of the park.

Brick walls, with mouse holes at the bottom, will surround the space, separating it from the properties on either side.

Cormier says they also plan to create a creek-like water feature, along with plants like catnip, black locusts and large trees adorned with bird houses.

This park is expected to be completed by 2022.

The Addisons Residence to close 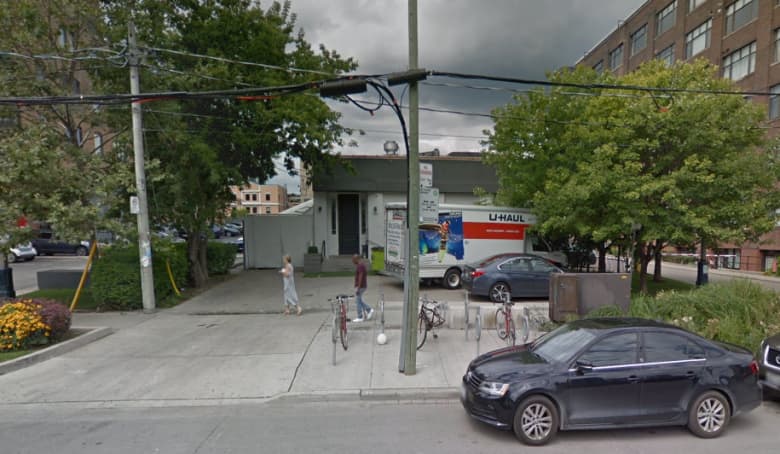 This street-view shows The Addisons Residence, at 456 Wellington St. W., in 2017. In the near future, it will be demolished to make way for a cat-themed park. (Google Street View)

In an email to CBC Toronto, The Addisons Residence said: “At this time we have no comment,” but both Cormier and Cressy confirmed the closure of the club.

A property search also verified 456 Wellington St. W., where the lounge is located, was sold to The Well in 2017.

It’s unclear if the lounge will move elsewhere, as the current building is not incorporated into the park’s plans.

A rendering of the Draper Street cat-themed park. (City of Toronto)

The Draper Street location will include similar elements, with another ode to Dizzy, greenery and a communal sitting space.

It will transform a space left vacant since the 1940s, according to Cressy.

It’s expected to be completed by 2021 at the latest.

‘It brings people together’

Cormier says he’s only heard positive feedback about the cat-themed parks so far, and he hopes they’ll provide a similar experience to Berczy’s dog fountain.

“People love it and people seem to embrace it and they seem to want more of those moments in our cities,” he said.

The treasurer with the Wellington Place Neighbourhood Association, Lee Jacobson, says he believes the parks are an exciting addition to the increasingly changing, and “park deficient,” neighbourhood.

“I’m not a cat person, but I like the idea of a park with a theme,” he said. “I think it’s kind of fun and if you spend any time in Berczy Park, you see how popular it’s become as a tourist attraction.”

Although the plans are still years away, Cressy hopes this model of creating green space can be used for future developments.

“We actually in the City of Toronto have hundreds of millions of dollars of cash in lieu of parkland that we’re waiting to spend,” he said. “That cash depreciates in value over time as property values continue to rise.”

“We have to do a better job, and a more creative job, of creating new park spaces, and while Rail Deck Park has the potential to truly transform downtown Toronto for park space, we can’t simply wait.”