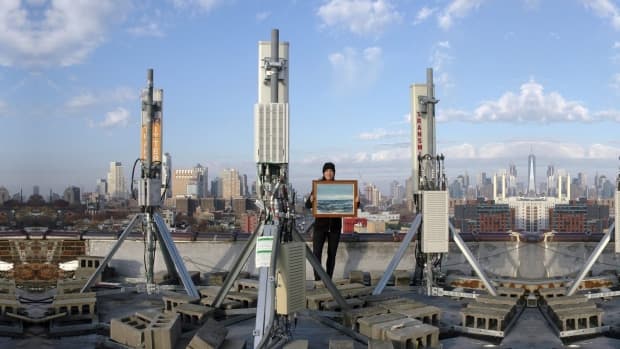 Maria Hupfield stands on the roof of her Brooklyn studio, surrounded by internet and cell phone transmitters. She’s holding a painting by her late mother, of the Georgian Bay coast where she grew up.

That’s one of the images people across Canada could see when they drive by a billboard this summer.

The billboards are part of a national exhibit called Resilience, which features artwork by 50 First Nations, Inuit and Metis women.

Winnipeg-based organization Mentoring Artist for Women’s Art (MAWA) spearheaded the project as a response to the Truth and Reconciliation Commission’s call to integrate Indigenous culture and history into the natural story.

“Indigenous women’s art was relegated to artifact, or craft. It was put in anthropology museums. It wasn’t given the respect and understanding that it should’ve been given as art.”

By putting their work on billboards, Martin says the project amplifies the artists and the themes they explore.

Hupfield, who is originally from Wasauksing First Nation near Parry Sound, says she was honoured to be involved in the project.

“I’m often dealing with representation, so a lot of the issues that affect Indigenous women are something that I’m conscious of in my own work,” Hupfield said.

“It was a natural fit for me to be able to participate in this, as a bigger conversation. Because it does look at not just one individual person, but a collective of artists, at those many voices.” 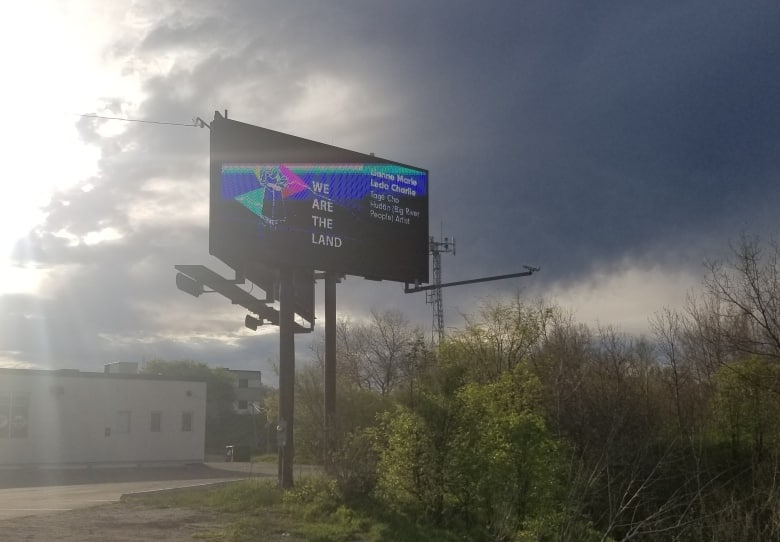 This digital billboard near Lasalle Boulevard and Nortre Dame Avenue in Sudbury will be feature the Resilience billboard project until August 1st. (Robin De Angelis/CBC)

More than just a title

“Resilience” is central to the project, not just as a name but as a theme that both Martin and Hupfield connect with.

Martin says Indigenous languages have included the concept of resilience for centuries.

“It’s about adaptability of Indigenous cultures to all the changing environmental, social and political landscapes,” she said.

“I really felt that resilience is embodied in the women’s art as endurance and adaptability and sovereignty, in relation to their own cultural practices, contemporary identities, the environment and also the impact of the colonial history.”

For Hupfield, the title reflects the determination and drive of Indigenous women.

“Resilience is such a great title, because it’s everything. It’s showing survival [and] endurance in the face of all kinds of situations.”

A digital billboard near Lasalle Boulevard and Notre Dame Avenue in Sudbury will be feature the project until August 1.

You can find out where all the billboards are located across Canada and read more about the artists at the project’s website.