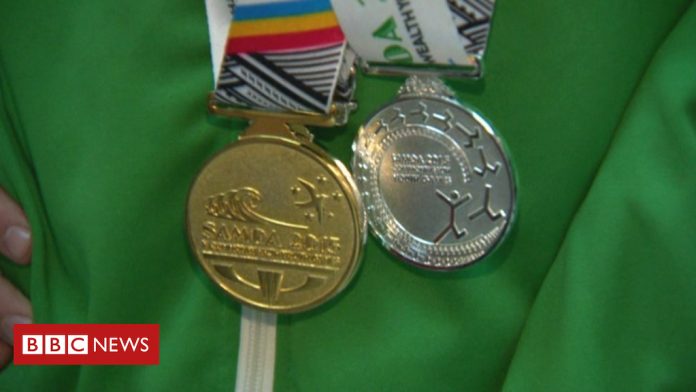 Northern Ireland has lost the chance to host the 2021 Commonwealth Youth Games after it failed to guarantee funding.

It won the bid to stage the event two years ago, but then Stormont’s devolved government collapsed before ministers had agreed a financial package.

Civil servants, running Northern Ireland in ministers’ absence, have decided it is “not value for money”.

The Commonwealth Games Federation (CGF) said it was disappointed but it invited other cities to bid to host the games.

The Northern Ireland Commonwealth Games Council (NICGC) criticised the failure to guarantee funding saying it was “a slap in the face for our young people”.

On Friday, NICGC said it had learned that the head of the Civil Service in Northern Ireland, David Sterling, had confirmed that public funding would not be provided to host the games.

It said the decision sent a “strong message to the international community that Northern Ireland is closed for business”.

The council, which had lobbied hard to save Belfast’s bid, said the event “would have brought nearly 2,000 of the world’s finest young athletes to Northern Ireland”.

It added: “To our young people, we can only apologise for the behaviour of your elders in positions of influence. They have let you down on this occasion.”

A spokesperson for Northern Ireland’s Department for the Economy said the business case for hosting the 2021 Commonwealth Youth Games was twice put through “a lengthy approval process”.

It added that “on each occasion it has been concluded that funding for the event does not represent value for money”.

“While this is a disappointing outcome for the NI Commonwealth Youth Games Council, without a clear demonstration of value for money there is no basis for an accounting officer to offer financial support for the games unless they were formally directed to do so by their minister.”

The federation has now invited other Commonwealth cities to submit alternative bids to host the 2021 games.

“Belfast will be able to re-submit its candidature for 2021, or may wish to postpone its ambitions for a future edition,” a statement from the CGF’s board said.

The 2021 games were initially awarded to Northern Ireland in 2016 but there have been months of uncertainty over a final funding agreement.

With no locally-elected minister in place to take decisions since Stormont collapsed in January 2017, civil servants were left with the responsibility of handling the preparations.

Last July, a ceremony to hand over the games to Belfast was cancelled due to the delay in confirming the financial package.

The CGF’s board discussed the problems at a two-day meeting in Birmingham which ended on Friday.

The federation’s president Louise Martin, said the board “empathises with the ongoing circumstances surrounding Northern Ireland’s legislative Assembly and Executive and has maintained a collaborative dialogue with our colleagues in Belfast about their ambitions to stage the Commonwealth Youth Games”.

“However, with no funding guarantees in place, the CGF executive board expressed its disappointment to the Northern Ireland Commonwealth Games Council and resolved to begin discussions and invite expressions of interest from other Commonwealth cities who wish to build on the successes of Samoa 2015 and Bahamas 2017 and host the 2021 edition of the Youth Games.”

The re-bidding process is expected to take about six months.