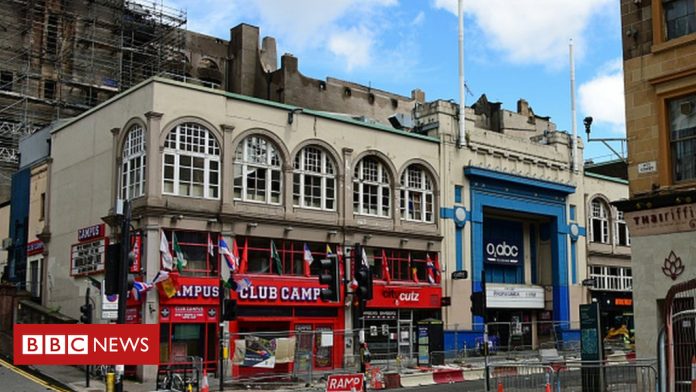 Looters have raided a bar that was damaged by the fire at the Glasgow School of Art.

Intruders are understood to have stolen a quantity of alcohol from Campus.

The bar is inside a cordon placed around the block on Sauchiehall Street following last week’s devastating fire.

A police spokeswoman said inquires were ongoing. Glasgow City Council had earlier warned people not to breach the cordon amid safety fears.

Police Scotland said officers were alerted to the raid at about 03:20 on Thursday.

A police spokeswoman said: “Inquiries are continuing following a housebreaking at a premises in Sauchiehall Street, Glasgow, around 3.20am on Thursday 21 June.”

More than 120 firefighters were involved in fighting the blaze which engulfed the school of art.

A number of businesses remain closed, and residents are being restricted on where they can park.

The restrictions remain as building control officers have warned people to stay away from the site of the art school fire.

They revealed concerns about the end walls of the building, which could fall into the street “without warning”.