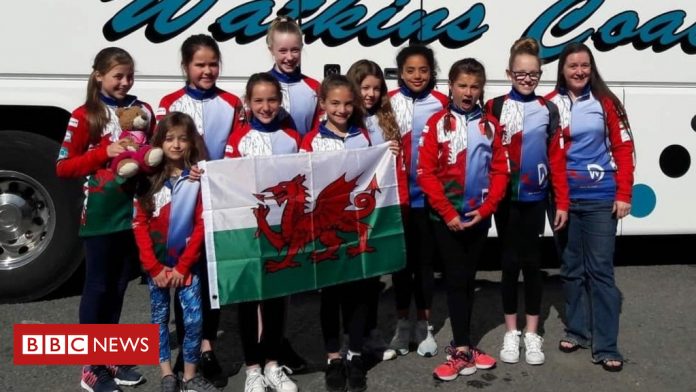 A group of dancers face their own World Cup heartache after being delayed for almost 24 hours before the “biggest competition of their lives”.

The team of 10 girls representing Wales – aged between 10 and 13 – have already missed an event at the Dance World Cup in Barcelona.

Now they are trying to make a display on Saturday evening after getting stuck at Birmingham Airport on Friday.

“There have been some tears,” admitted team organiser Eirian Thomas.

The Planet Gymnastics acro dance team’s 13:30 BST flight on Friday was cancelled but after a day in Birmingham Airport, they are now on route to Spain.

Vueling have told them technical issues and this weekend’s air traffic control strike in France were the reasons behind the delay.

But the dancers have accused the Spanish budget airline of “not keeping them in the loop”.

The girls – from a club in Cardiff – missed Friday’s World Cup opening ceremony and their first event on Saturday morning.

“It’s so disappointing for the girls, they’ve been gearing up for this for more than six months,” said Ms Thomas, whose daughter Mairwen, 10, is in the group.

The club have raised more than £3,000 to help to pay for the trip to compete against 50 nations and 5,000 other competitors.

“This is all their world has been about for months,” Ms Thomas added. “So to think we might not make any of the World Cup, is absolutely crushing for the girls.”

Vueling put them up in a hotel at Birmingham Airport overnight and they took off at about 13:00 on Saturday for a “mad rush” in a bid to save the trip.

“The girls were disappointed to miss the opening ceremony as we were meant to take part,” added Ms Thomas.

“So we sang the Welsh anthem in the departure longue and the girls did some moves.”

Vueling have been contacted for comment by the BBC.