Daniella Levy-Pinto  has lost track of the number of times she’s nearly been hit by cars turning right on red lights.

As someone with complete vision loss, Levy-Pinto gets around Toronto by relying on her hearing and her trusty guide dog. But the safe streets advocate and Walk Toronto spokesperson says there are constant challenges: Poor street designs, speeding drivers, narrow sidewalks, to name a few.

Near-misses at red lights, she said, is what alarms her the most.

“Most likely the drivers didn’t even see me,” Levy-Pinto said. “They just sped away, my dog pulled me back. That was really terrifying.”

Banning right turns on red lights, a policy that already exists in cities such as New York and Montreal, is one of 15 road safety recommendations within a new report titled #BuildTheVisionTO.

It was produced by the Toronto Centre for Active Transportation (TCAT), an organization supporting safe and inclusive streets, in partnership with advocacy groups 8 80 Cities, Cycle Toronto, Friends and Families for Safe Streets, and Walk Toronto.

“We know the proven solutions. It’s time to build the vision,” said Amanda O’Rourke, executive director for 8 80 Cities at the group’s announcement on Tuesday.

“We’re calling on the next term of council to step up and take immediate action.”

The group plans to gauge mayoral and city council candidates’ support for the report’s recommendations — including reducing speed limits and building up the city’s cycling network — by distributing a survey to gather their responses.

A month before October 22’s municipal election, TCAT will make the results public. 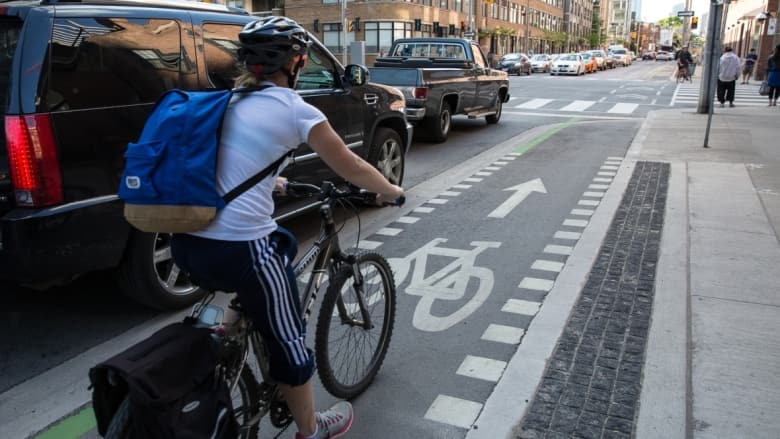 Building protected bike lanes on main streets and speeding up the city’s cycling network plan are both recommendations in the new #BuildTheVisionTO report. (David Donnelly/CBC)

‘I would rule nothing out,’ Tory says

On Monday, a 50-year-old woman walking near Briar Hill Avenue and Dufferin Street was struck and killed in a hit and run. The following day, 58-year-old Dalia Chako died after the driver of a flatbed truck collided with her as she cycled in the Bloor Street bike lane near the University of Toronto.

The recommendations were also released the same day Mayor John Tory moved an executive committee motion to allocate up to $13 million from the city’s surplus to Vision Zero efforts, bringing the total investment to $100 million over a five-year period.

Tory’s motion gained unanimous support and is heading to city council for approval next week.

When asked about the possibility of banning right turns on red lights prior to Tuesday’s committee meeting, Tory said, “I would rule nothing out.”

Tory also told reporters the city is already looking into, and investing in, many of the 15 proposals brought forward in the #BuildTheVisionTO reports.

One recent proposal heading to city council, for instance, aims to ensure more than 750 local schools will gain community safety zones and speed enforcement in the years ahead.

Tory said he will also meet with city staff to report on Vision Zero efforts once a week.

He expects the staff to provide numbers on what’s being done — be it how many bike lanes were added, or how many crosswalks were zebra-painted — to boost road safety throughout the city.