Windsor track star Melissa Bishop has been sidelined this running season — she’s due to deliver her first baby next week.

It’s not something the 800-metre champion expected. At 29, she’s at the peak of her career, having won gold at the 2015 Pan Am Games and competed in two Olympics.

The plan was to have a baby with her husband Osi Nriagu after she retired — not mid-career. The two met while competing at the University of Windsor and married last fall.

But she’s embraced being forced off the track.

“Pregnancy is a whole other game,” she said Monday. “The athlete in me just wants to go out the door and just push through the hurt … but I’ve learned that it’s not best to do that.”

Bishop has continued to train through her pregnancy, working out on the elliptical, the bike and in the pool instead of the track. She’s posted regular updates on social media, chronicling what working out is like with a baby bump.

She said she loves her “womanly figure” but is looking forward to getting her racing shape and body back — something she was working on her entire competitive life.

“I think having all the experience of listening to my body in the past decade or so from being an athlete I’ve been able to safely get through this and still maintain some fitness.”

Bishop credits a bunch of other pro athletes who have hit pause to have a baby and then come back competitive, like hockey centre Hayley Wickenheiser and tennis star Serena Williams.

Hear more about how Bishop has handled her pregnancy:

It’s going to be an interesting summer for Windsor track star Melissa Bishop. She won’t be racing because she is 38 weeks into a pregnancy. So what can a very pregnant woman do to maintain the body of a world-class athlete? We ask her. 10:14

Plans to be back on track soon

While unplanned, the pregnancy suits this year’s competition schedule. 2018 is considered a down year for running, with no world championships or Olympic Games.

Bishop’s goal is to return to peak performance post-pregnancy, with plans to compete in 2019 World Championships in Qatar and then return to the Olympics in Tokyo in 2020.

She just missed the podium during the 2016 games in Rio, where she placed fourth. 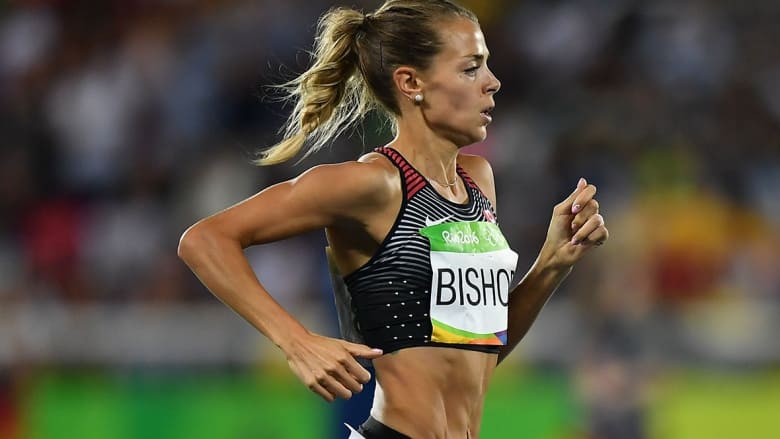 Bishop finished fourth in the women’s 800 metres at the Rio Olympics in 2016. (Brendan Moran/Sportsfile via )

Her baby’s not here yet but she’s already plotting out when she’ll be back running. She is working with her doctors and physiotherapist to see when it is safe but expects to be back on the track six to eight weeks after giving birth.

“We’ll just take it week by week and see how things go.”