Yona Prisman opened her eyeglass store earlier this month on what she says is “the street with the most character in Old Montreal.”

But less than two weeks after she opened up shop on Saint-Amable Street, next to Place Jacques Cartier in the heart of the neighbourhood, she was greeted by a nasty surprise.

“It was Monday morning. I arrived at work and there were bulldozers and cement breakers and every noisy truck you can think of,” Prisman said.

It’s her first year in business in Old Montreal and Prisman said she wasn’t given any notice from the city that it was about to start construction on the street next to her store.

Other merchants in the area say they were given three-weeks’ warning of the impending work.

“This area survives on tourists. All of the businesses on this strip are only open in the summer for the tourist season,” Prisman said.

“You can’t really measure how much pedestrian traffic we’re losing because of the construction.” 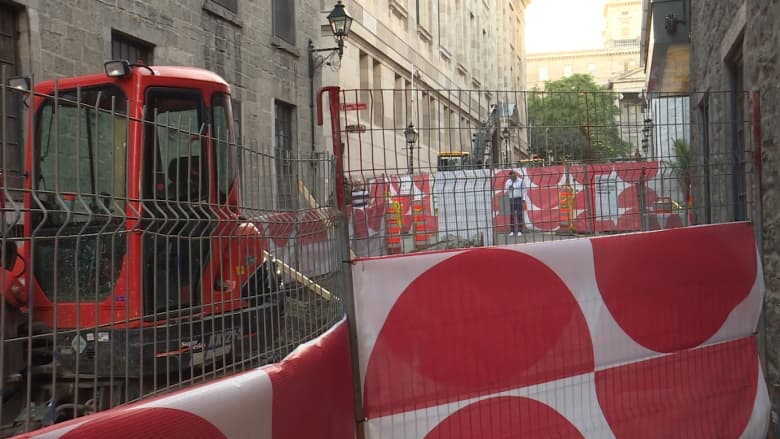 The City of Montreal says the roadwork is unavoidable. It’s part of its effort to revitalize Saint-Paul Street, a major draw for tourists visiting Old Montreal. (Kate McKenna/CBC)

The city says the roadwork is unavoidable. It’s part of its effort to revitalize Saint-Paul Street, a major draw for tourists visiting Old Montreal with its many restaurants, bars and souvenir shops.

The street’s cobblestones need to be replaced by hand, and that’s why the work is expected to last until October.

Earlier this month, the Plante administration announced it would set aside $25 million to compensate merchants hurt by public construction projects.

Businesses can qualify for up to $30,000 each in compensation if they qualify.

The money, retroactive from Jan. 1, 2016 through to the end of 2021, is to help businesses affected by municipal work sites that prevent customers from easily accessing their restaurants and stores.

Prisman said she that’s an option she’ll consider, but she hasn’t looked into the details of the city’s offer yet.

In the meantime, she says she’s hoping for the best.

“It’s hard to stay positive. Although, we are definitely trying to.”