Burly. Bearded. Testosterone-fuelled. All adjectives one might expect to describe a crowd at a biker rally.

But that couldn’t have been farther from the vibe at Backroad Ball in New Brunswick.

For the annual women-only biker fest in Penobsquis, Route 114 was a sea of chrome and leather as women participated in group rides, motorcycle games, workshops, and live shows .

Three hundred attendees rolled in from across the Maritimes, and from as far away as Pittsburgh and British Columbia.

“There’s nothing cooler than that feeling of seeing groups of ten, 12, 20 women riding up,” d’Entremont said.

“They’re so excited when they get off their motorcycles. They take off their helmets, and they’re just ready to party.”

The CBC’s Julia Wright spent the weekend at the event and captured these photos. 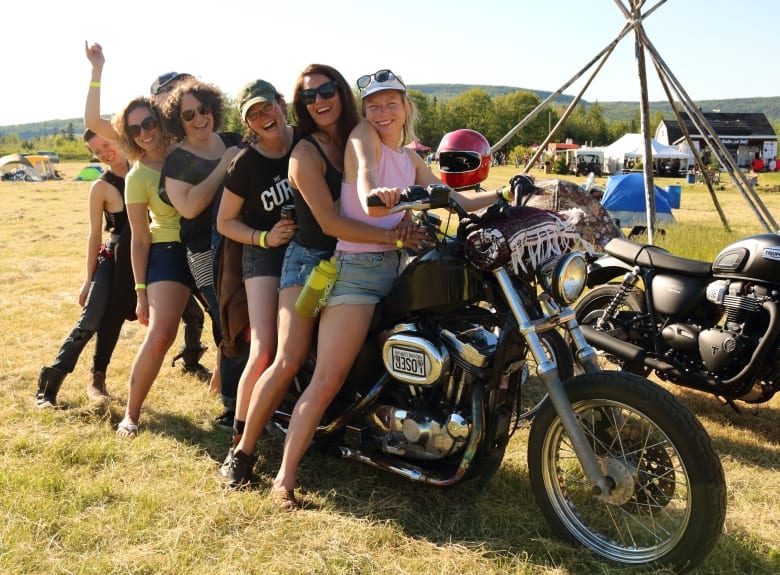 “A lot of people ride with their husbands, with their boyfriends, with their partners, maybe one or two other women,” d’Entremont said. “But there are so many women who actually do ride here in the Maritimes.”

“It’s important to all get together and celebrate this community, learn about each other, and make those connections.” 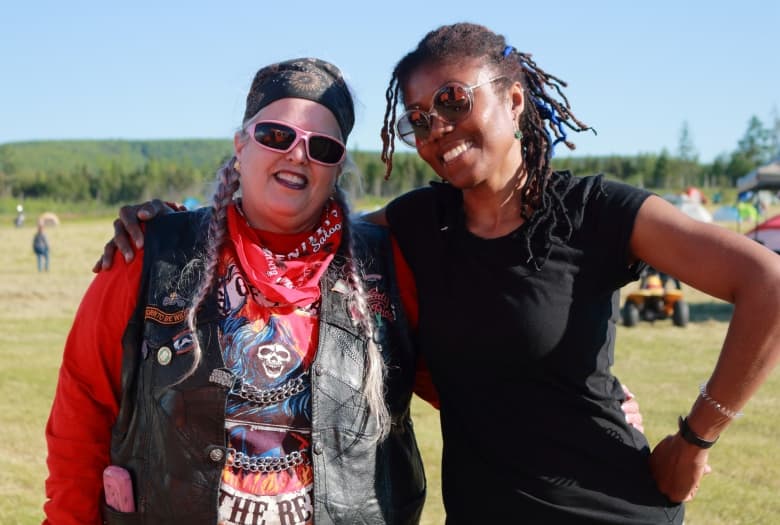 Sheila Kelly and Erica Meus-Saunders pose together on the first night of the festival. Kelly, 56, is a grandmother and great-grandmother who works on the oil fields in Fort Saskatchewan.

Kelly, who lives near Woodstock, started riding 24 years ago with her teenage son.

“I wear a green ribbon because my son was an organ donor,” she said. “I lost my son. I lost my stepdaughter to breast cancer, seven weeks apart. I just lost my husband two months ago.”

Understandably, she said she didn’t feel like riding this summer.

“I was in a funk,” she said, until her her daughter and friends from the biker group Merla’s Coven persuaded her to take her red 1200 Harley out for the first time this season.

“I wasn’t 10 minutes on the bike and I was glad that I finally got on it this year,” she said.

“The girls talked me into coming. I’m so glad they did.” 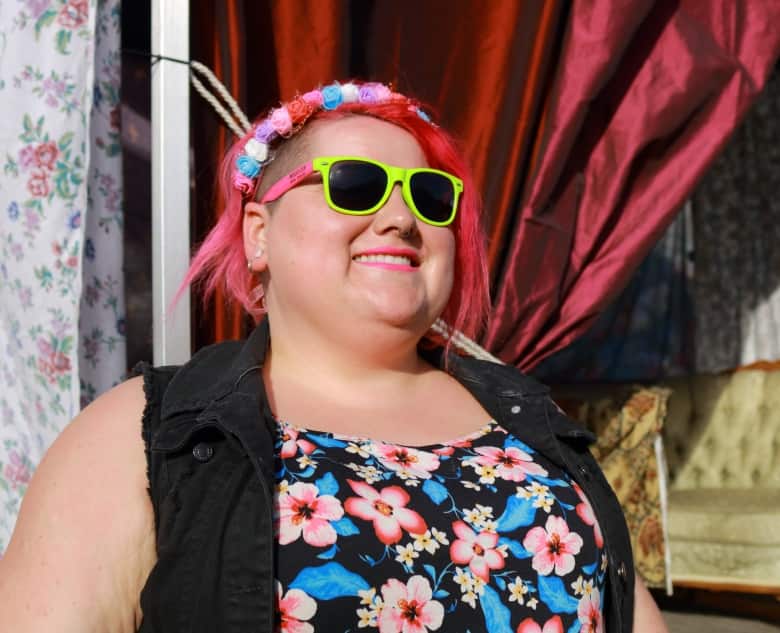 Pretty in pink: Amy Donovan rocked a vivid, colour-co-ordinated look at the festival on Saturday.

“That’s what makes this so special.” 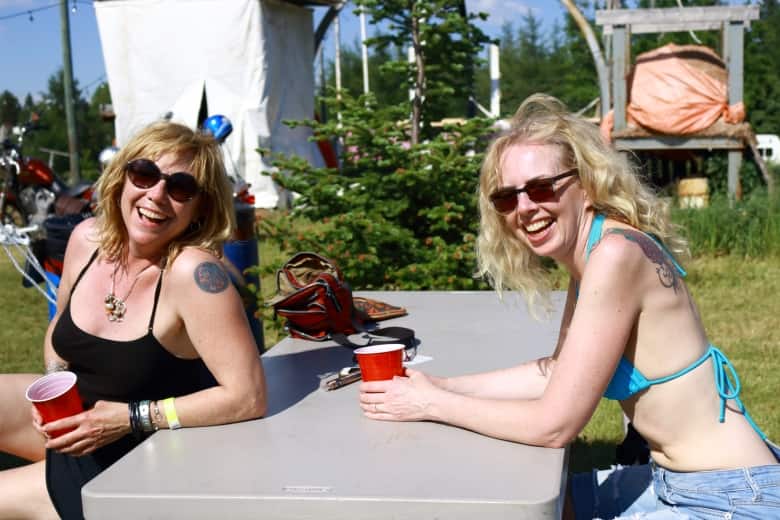 Kym Murphy and Tracy Kilpatrick catch up over a cold drink after checking out the vendors market on Saturday.

“To finally see it come to fruition and see the women arrive, the tents in place and hear the music pumping through the grounds, it’s such a feeling of relief,” d’Entremont said.

“This is what we’re all about — bringing these women here together.” 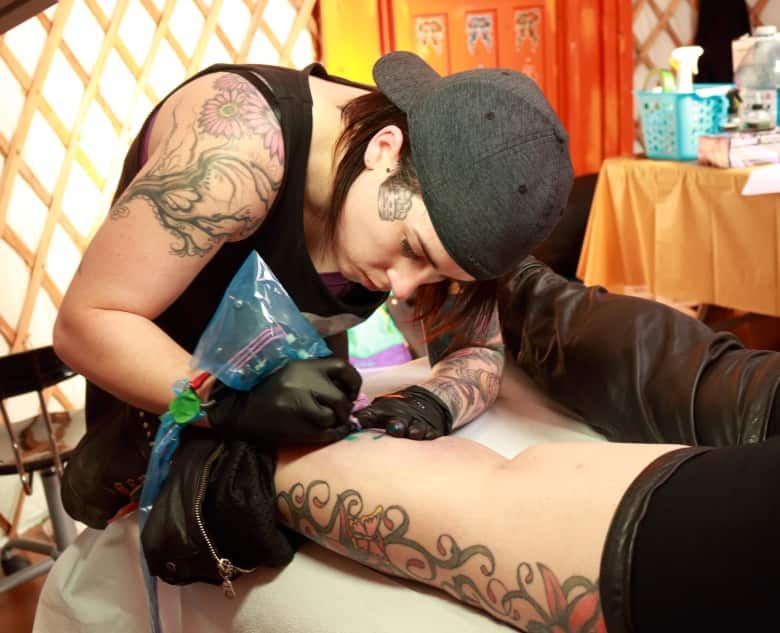 Sayers and fellow artist Jesse-Lynn Jenkins of Oceans of Ink in Sussex set up shop in the Hurt Yurt, a mobile tattoo studio at the edge of the campground.

Each of the artists worked into the wee hours, offering special limited-edited tattoo designs. 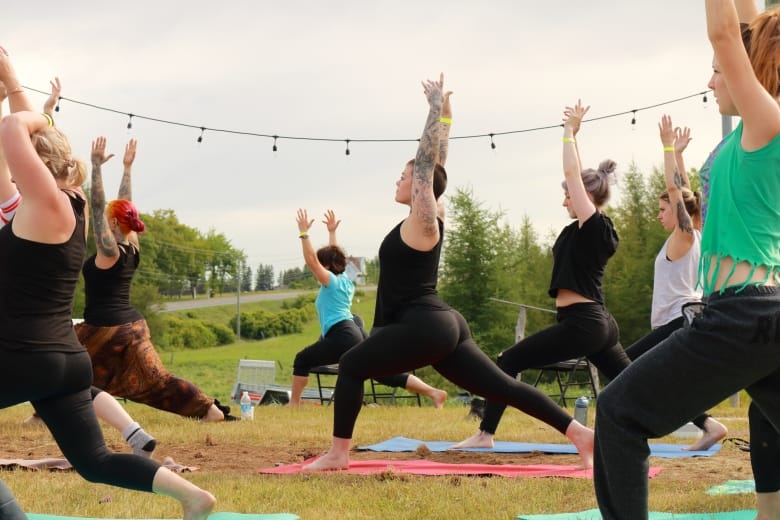 Bleary-eyed Backroad Ballers were led in a yoga class by Mary Zarei of MarYoga ​on Saturday morning.

Other workshops included “Tech Talk,” with Brian Stuart of Toys for Big Boys, and “Finding Your Inner Goddess,”  with Carole McLatchie​ 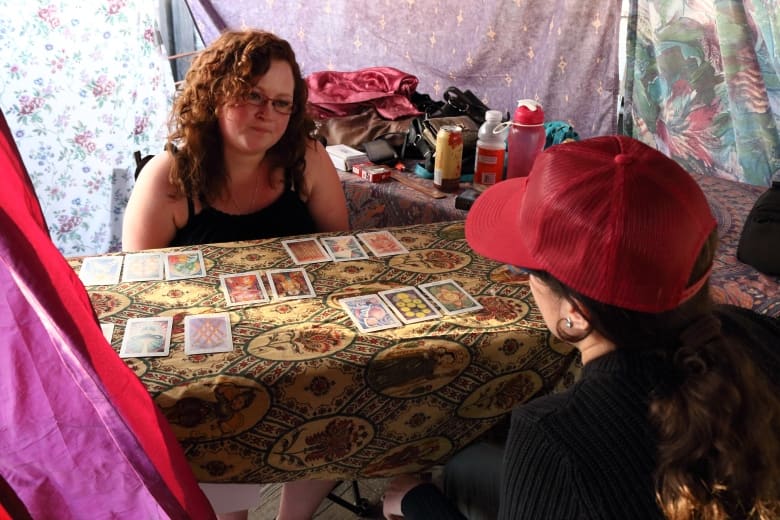 Skeptical CBC reporter Julia Wright gets a tarot card reading with Tarot by Sarah, who served up empowering advice  about ditching users and standing up for your ideals. 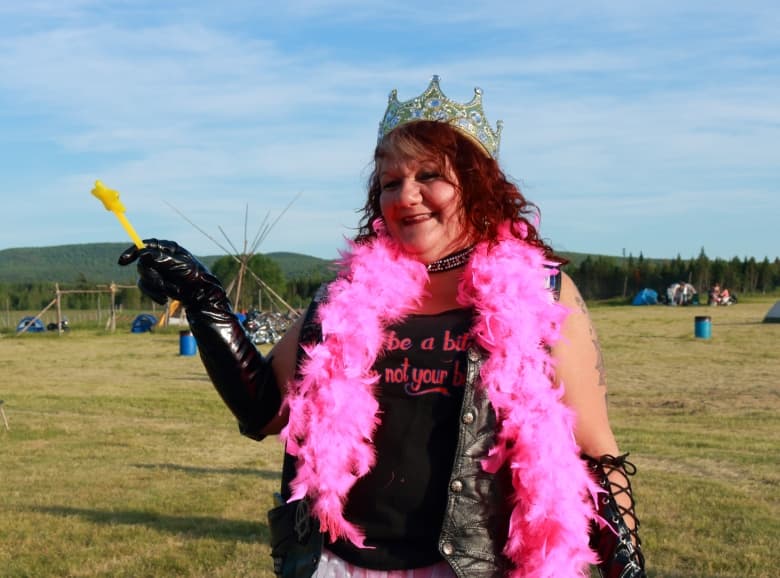 Kentville biker Paulette Rogers of the Road Crew motorcycle club. Rodgers was the belle of the ball in a spectacular pleather ensemble accessorized with lace-up gloves and a pink feather boa.

“I was always interested in motorcycles my whole life, but then kids happen, marriage happens, and bang, one day, I thought, ‘I wanna go get my licence,'” she said.

She called the vibe at the Backroad Ball “more relaxed” than larger festivals she’s attended, including Laconia Motorcycle Week and the Harley Rendezvous,

“The women are pretty cool and there’s no judging,” Rodgers said. “You can come here and be yourself. It’s a great time.” 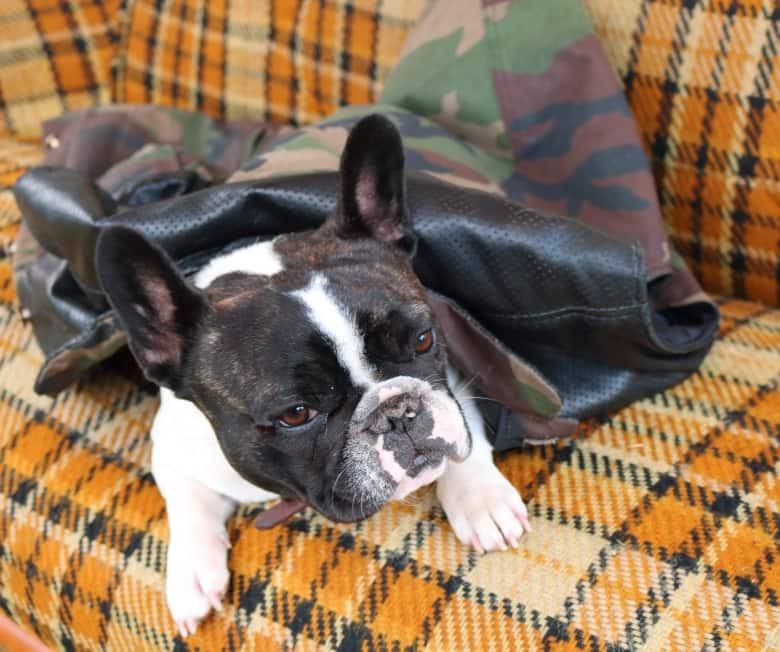 Unofficial festival mascot: Lola, a French bulldog, keeps warm snuggled into a biker vest at Mad Squirrel Leather, one of the vendors. 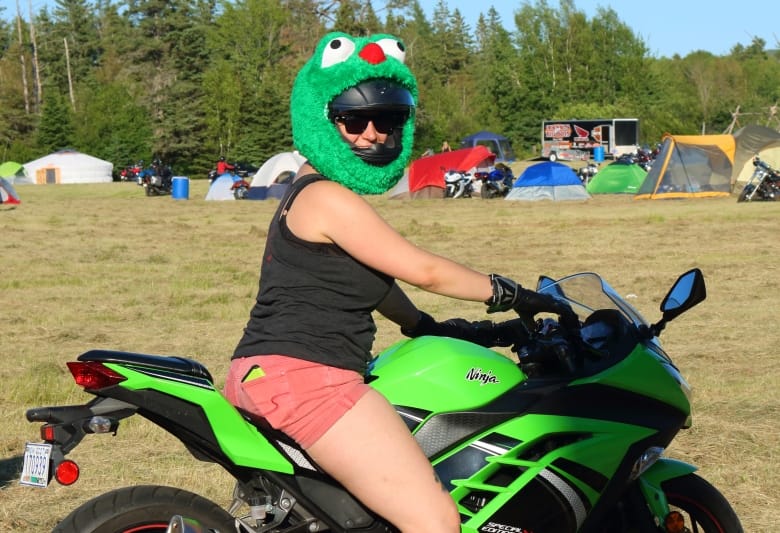 A motorcycle-riding muppet gets ready to compete in the biker games on Friday evening. Teams of bikers vied for prizes in challenges that included tossing water balloons over a wooden archway and pushing an empty keg down a field with the front wheel. 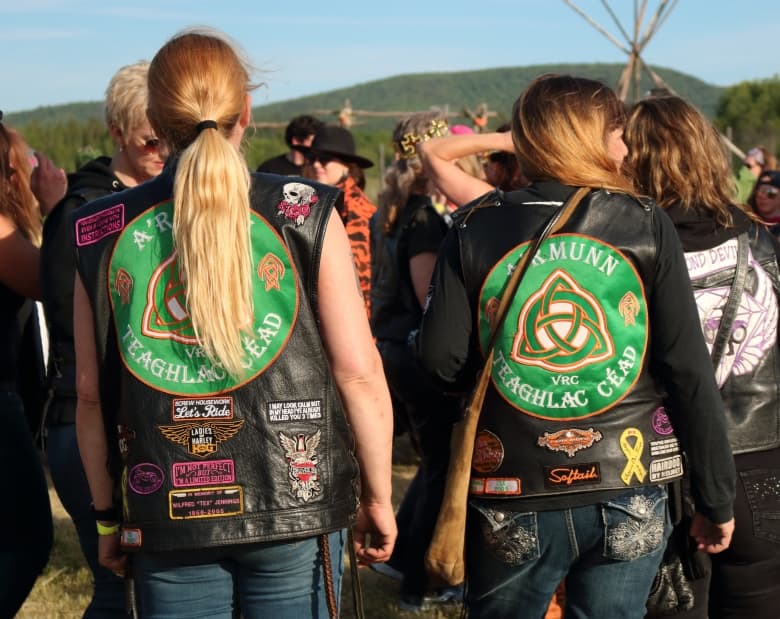 Members of all-women motorcycle groups like Merla’s Coven, the Litas, and the the Mactaquac Motor Maids were easy to identify by their colourful back patches.

In addition to the larger groups, plenty of riders also rolled in solo.

The Backroad Ball has nearly tripled in size since the inaugural event, according to co-founder Kristin Munro, 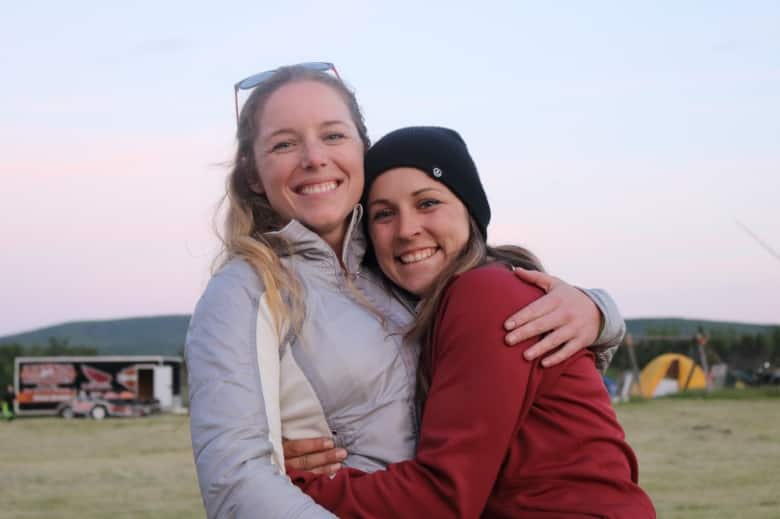 Kallay, 26, planned the Backroad Ball to be her final stop on a 1½-month bike tour of Quebec, Nova Scotia and New Brunswick on her Yamaha WR250R dual sport bike.

“I’ve been riding dirt bikes since I was a kid, whenever I could steal them,” she said.

As for this rally, she said. “I have never seen anything like this in my life. It’s held up to every expectation. Just a cool collection of awesome, empowered women — it’s a great environment.”

“To any women who are riding on the back: I know sometimes it’s scary, but get off and go on your own,” she said. 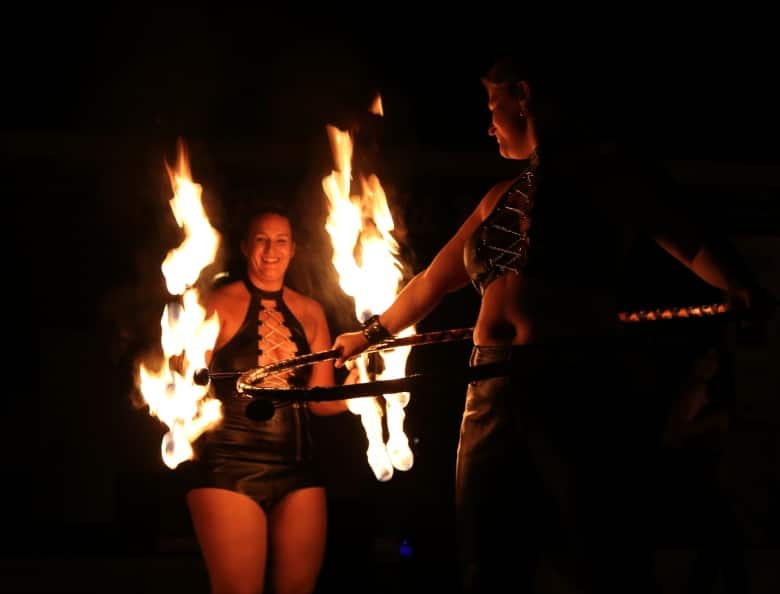 Other talent included pole fitness performers Christine Johnson and Anneke Russell, and a risqué, garter-snapping show from Snap! A Burlesque Revue, with all proceeds going to animal welfare charities in New Brunswick. 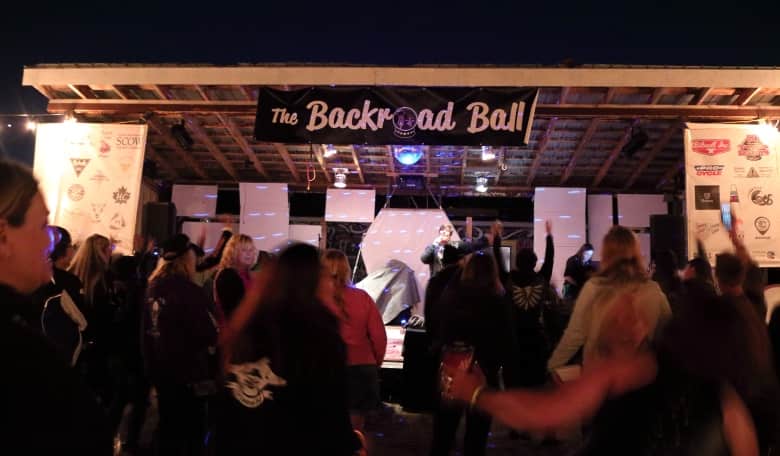 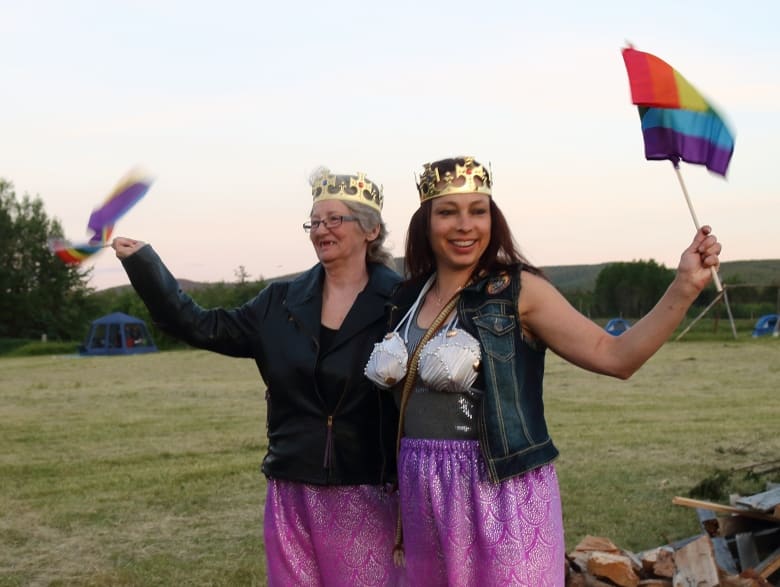 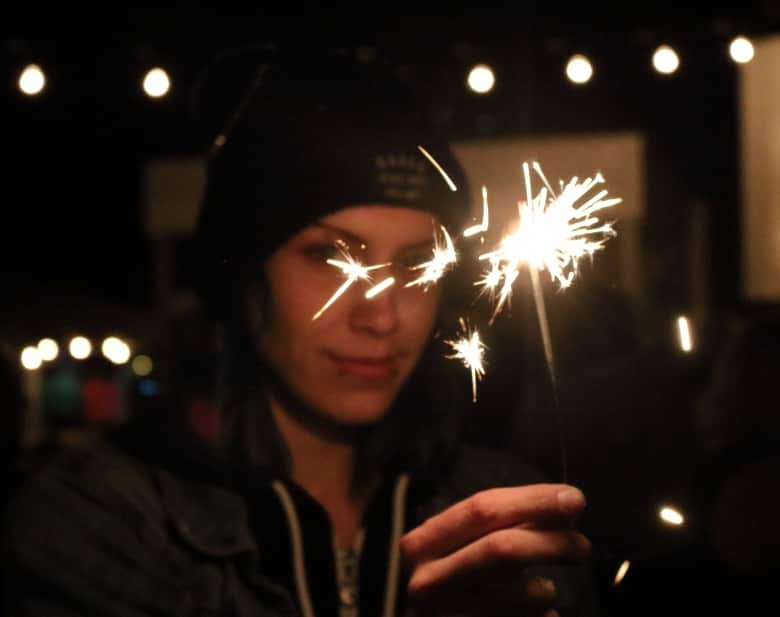 Shine bright like a diamond: Cait Milberry holds a sparkler while waiting for her turn at the karaoke mic. 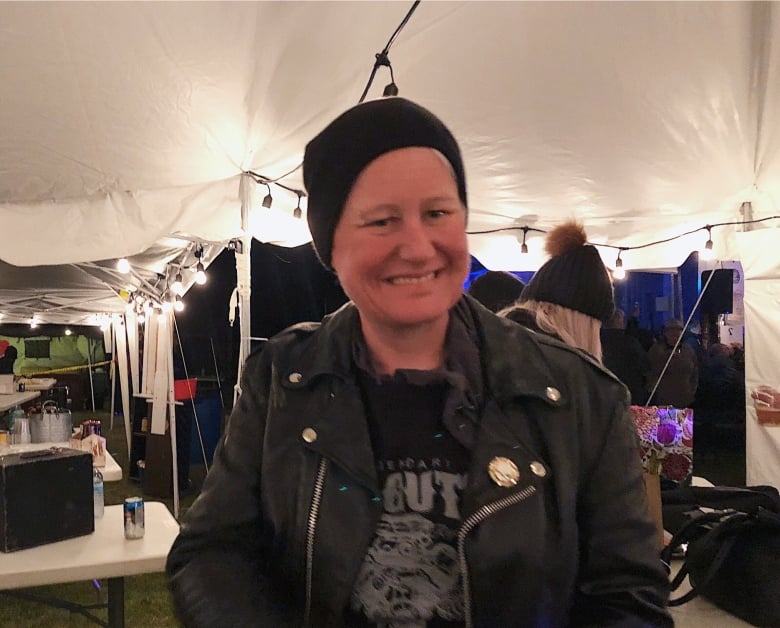 B.C. biker Julianne Mccaffrey, 45, hit a few bumps along her way to Penobsquis from Victoria.

Mccaffrey, a biker for 25 years, crashed in Quebec City and broke three ribs on her right side, fracturing two more on her left.

“The Quebec drivers are really crazy and they don’t look,” she said. “They collided with me and I went across three lanes and I ended up underneath a vehicle.”

She proceeded to ride to the festival a few days later — against doctor’s orders.

“I said, you don’t understand,'” she said. “I have come all the way across from British Columbia for this one rally, and I have to be here. I’ve gotta support my people.’

“These are my people and I had to do it.” 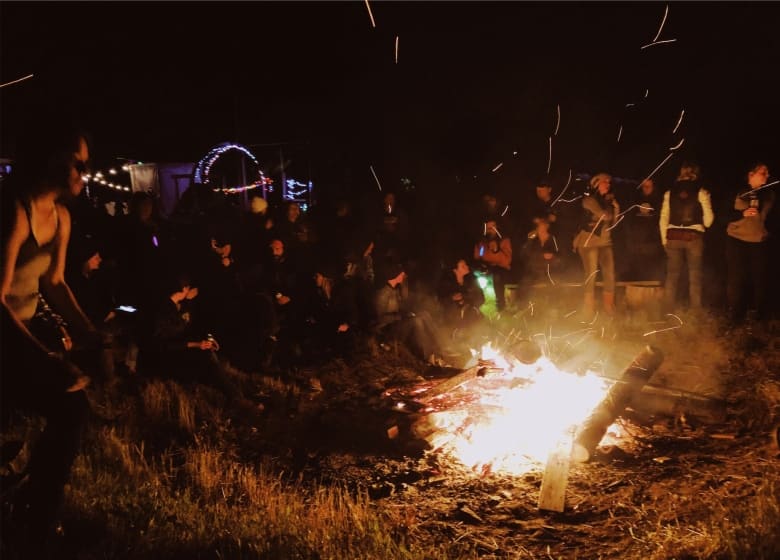 “We want to make those bonds here — so that when people leave, they can keep those connections and those friendships.”