With bandages shrouding her torso and tubes draining fluid from her chest, Lynn McDaniel musters the energy to talk about her ordeal — not the cancer that threatened her life, but the failed government payroll system that she says has ruined her mental health.

McDaniel has no trouble discussing her breast cancer diagnosis and recent mastectomy, but the damage done by Phoenix over the past two year brings tears to her eyes.

“I’m really serious when I say I’m not afraid of cancer. Cancer’s gone, they’ve taken it out. I’m going to go through chemo and radiation and whatever I need to get rid of that. But my real fear is Phoenix. I’m afraid to go back to work. I’m afraid I’m going to lose my house,” said McDaniel, a help desk technician at the Canadian Radio-television and Telecommunications Commission (CRTC).

Tens of thousands of federal workers have been improperly paid since Phoenix was launched in February 2016, and as of May 30, an astounding number of cases remained unresolved.

McDaniel first went weeks with no pay, then began receiving too much.

“It was all over the map. It plunged me into deep debt, ruined my credit score,” she said.

Without the support of family and friends, McDaniel said she would have been forced to sell her house by now.

She was off work 10 months last year due to depression and “a host of medical problems” resulting from the stress. She lost her appetite, and with it nearly 30 kilograms.

McDaniel returned to work in March, but never received a paycheque before her cancer diagnosis in April. Two weeks ago she underwent the mastectomy and breast reconstruction surgery. 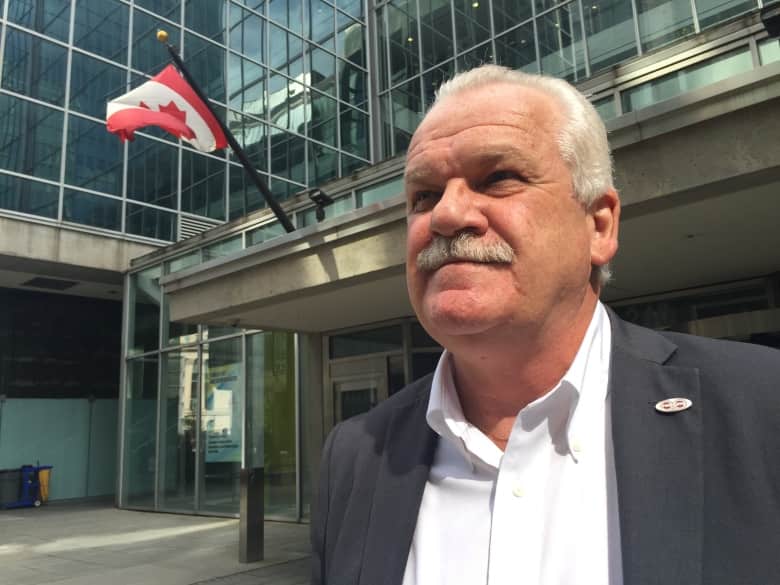 Chris Aylward, president of the Public Service Alliance of Canada, is calling on Treasury Board to negotiate compensation for federal workers for damage to their mental health caused Phoenix. (Ashley Burke/CBC)

As McDaniel begins down the long road of treatment and recovery, she’s also preoccupied about the day she goes back to work, and back to Phoenix. She’s worried about what will happen when she stops receiving the regular long-term disability payments she’s been getting from an outside insurer.

“I may have to go and work across the street at Metro with my son. Sounds ridiculous, but I’m willing to do that or Uber or something that will bring in cash to supplement the fact that I have to wait for the [government] cheque,” McDaniel said.

“I probably will need to work part time to supplement.”

“To address the real mental and emotional stress and unacceptable financial impacts on public servants, the government has initiated discussions with public service representatives to address the numerous grievances and legal actions,” the budget document noted.

While this was welcome news for public service unions, the president of the Public Service Alliance of Canada, Chris Aylward, said the government has yet to negotiate any damages for the mental anguish caused by Phoenix.

“We’re hearing from our members that the stress of this is definitely taking its toll,” said Aylward. “We’re being told that Treasury Board has no mandate to negotiate damages, yet the finance minister had it in his budget in February. They set aside money for damages.”

When asked on Wednesday about help for employees suffering from mental health issues due to Phoenix, Treasury Board officials responded that, “the Government of Canada continues to offer comprehensive benefits to employees, including sick leave, employee health care benefits, and the ‎Employee Assistance Program, among other tools and services.”