The architects behind a controversial addition to Ottawa’s Château Laurier still don’t have it “quite right,” but the city’s built heritage subcommittee stopped short of rejecting outright the latest draft Monday.

Members of the subcommittee echoed some of the harsh criticism from Ottawa heritage experts, who said the addition’s modernist design isn’t compatible with the rest of the historic hotel.

But they decided against rejecting the design, instead demanding changes in exchange for the heritage permit the project needs to move forward.

The subcommittee has asked the architect to:

The conditions must be approved by planning committee and city council before staff can start working on the revisions with the architect.

“We want to feel that the addition loves the Château as much as we do,” said Rideau-Rockliffe Coun. Tobi Nussbaum, the subcommittee’s chair.

If the motion passes, Stephen Willis, the manager of planning, infrastructure and economic development will ultimately decide whether the architect has met the criteria.

City councillors will get to vote on the final design before the site plan is approved.

The latest design features a rectangular, seven-storey building of glass and vertical limestone slats that match the stone of the original Château. The ground floor would be transparent to allow sight lines through to the existing hotel. 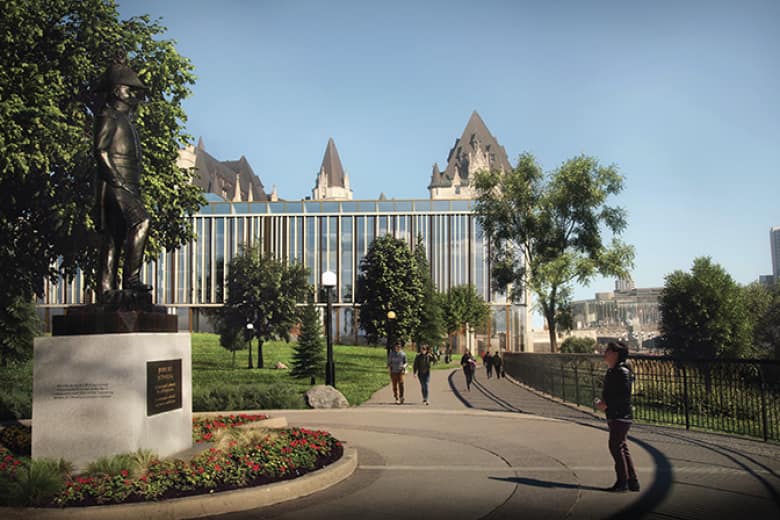 A rendering of the proposed design for an addition to the historic Chateau Laurier. (City of Ottawa)

Heritage advocates told the subcommittee the current design detracts from the romantic style of the original Château Laurier and the picturesque nature of the skyline along the Ottawa River from Parliament Hill to Major’s Hill Park.

The lead architect on the project argued the opposite. Peter Clewes said his minimalist take allows the Château to stand out without distraction.

He said adding more decoration to the building or mimicking the shape of the roof would be a bad idea.

“I’m concerned that it will start to detract from the magnificence of the hotel itself,” Clewes said.

The team behind the proposal argued the addition is actually an improvement for the Château Laurier. The design calls for windows in the ballroom to be opened onto a new courtyard.

“We’re more than prepared to consider and continue to iterate and reiterate different façade studies,” he said.

He said lots of the detailed design work will happen during the site plan process, which city council will oversee.

Rideau-Rockliffe Coun. Tobi Nussbaum says he wants to see an addition built with ‘a love of the structure.’ 1:04