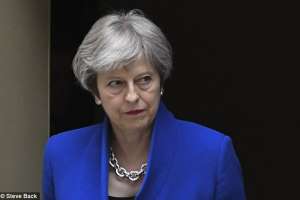 © Steve Back
PM Theresa May

A threatened Tory rebellion collapsed amid acrimony when Mr Grieve announced he would be voting against his own amendment to the EU Withdrawal Bill.

His decision infuriated Labour, which had wheeled in sick MPs in the hope of inflicting a defeat on the government.

But it also split Mr Grieve’s gang of diehard Tory Remainers, allowing the Prime Minister to win the vital vote by 319 to 303. 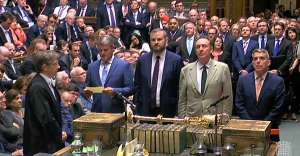 
Last night the Bill cleared the Lords after pro-Remain peers finally gave up their attempts to wreck it.

Former Labour cabinet minister Lord Adonis, who has led attempts to derail Brexit, threw in the towel, saying: ‘We have suffered an unmitigated defeat.’

Mrs May meanwhile urged warring Tories to now come together and fight for the best possible Brexit deal. 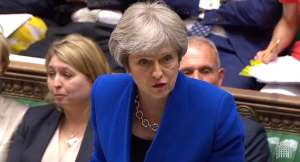 
Speaking at the Policy Exchange think-tank last night, she said: ‘Now, with the Withdrawal Bill on its way to the statute book, it is time to unite as a county and a party to get the very best Brexit deal for Britain.

‘More people voted to leave the European Union than have ever voted for anything else in our history.

‘Nothing would hurt our democracy more than to give the people a choice and then not to trust their judgment when they give it. 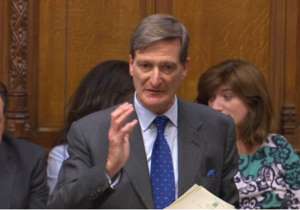 
‘By honouring that decision, we are showing that in the United Kingdom, the Mother of Parliaments, when the people speak their voices are heard.’

Mr Grieve, working in tandem with pro-Remain peers in the Lords, had been demanding a veto for MPs over any attempt to leave the EU without a deal. 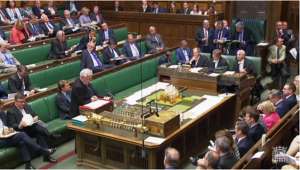 © Provided by Associated Newspapers Limited
Opening the Commons debate this afternoon, Brexit Secretary David Davis insisted the commitment gave MPs a say without risking ‘a situation in which parliament can instruct the government how to proceed’


Brexit Secretary David Davis told MPs the proposal ‘could be used to overturn the result of the referendum’.

Speaking ahead of the vote, he insisted the whips would fail in picking off the rebels.

But he capitulated after Mr Davis offered a ‘concession’ viewed by most at Westminster as ‘meaningless’.

In theory, the concession would allow Speaker John Bercow to rule on whether MPs could attach amendments to the vote on no deal – potentially allowing them to direct the government.

But Commons sources said this was simply a restating of the existing rules. 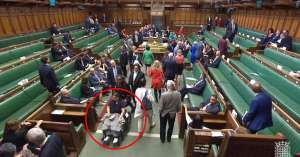 © Provided by Associated Newspapers Limited
Bradford MP Naz Shah (circled) was seen being wheeled through the Commons chamber as the vote was held, apparently with a paper sick bag on her lap


But he said he could not ‘entirely ignore’ warnings that his proposal could undermine the UK’s negotiations with Brussels.

To cries of ‘shame’ from the Labour benches, the former attorney general then announced he would no longer be voting for his own amendment. 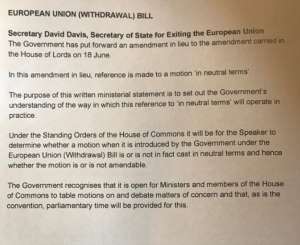 
Mr Grieve’s decision raises questions about future co-operation between the rebel Tory faction and the opposition.

Miss Sandbach said she would stick by the rebel amendment to provide a means of avoiding ‘catastrophe’ if negotiations with Brussels break down. 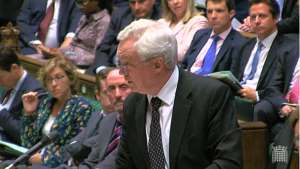 
At one point a sick Labour MP was steered through the Commons voting lobby in a wheelchair after Tory whips tore up parliamentary conventions that allow ill MPs to have their votes counted without them being present.

Sources described the whips’ decision as ‘unacceptable’ and hinted the government could face reprisals.

Veteran Eurosceptic Sir Bill Cash welcomed the passage of the legislation, which will end the supremacy of EU law after Brexit. 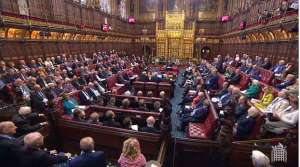 
He described yesterday’s events as ‘a victory for common sense and the national interest’.

Two sick Labour MPs were made to turn up to the Commons in wheelchairs today for a crunch Commons vote after Tory whips allegedly stopped them being ‘nodded through’. 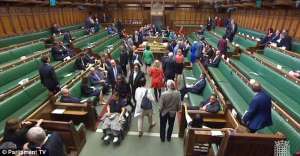 © Provided by Associated Newspapers Limited
Naz Shah, the MP for Bradford West (pictured in the wheelchair today) was released from hospital and wheeled through the division lobbies clutching a sick bucket for the vote.


Naz Shah, the MP for Bradford West, was released from hospital and wheeled through the division lobbies clutching a sick bucket for the vote.

While another Labour MP was also wheeled through to cast their ballot in a vote on whether Parliament should be given a ‘meaningful vote’ if no Brexit deal is done.


Labour blamed Tory whips for making ill MPs physically turn up to vote rather than allowing them to be ‘nodded through’ in a more comfortable part of the estate.

The Tories deny the claims.

He said on Twitter: ‘In all my years in Parliament – even in the 1970s – I have NEVER seen this. This is absolutely bloody shameful. 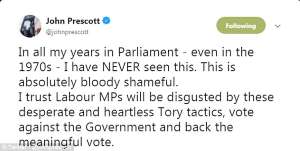 © Provided by Associated Newspapers Limited
Lord Prescott, the former deputy PM – tore into Tory whips for making the MPs physically troop through the division lobbies despite their ill health


‘I trust Labour MPs will be disgusted by these desperate and heartless Tory tactics, vote against the Government and back the meaningful vote.’

He added: ‘The Tory whips are forcing sick people to do this. Lower than vermin.’


Ms Pidcock, the heavily pregnant Labour MP, also had to march through the division lobbies with her hundreds of colleagues.

A spokesman for Jeremy Corbyn confirmed the Government was obstructing sick MPs.

He said: ‘As I understand it there has been a refusal to pass through people who are not in a state to vote in the normal way.

Meanwhile, heavily pregnant shadow minister Cat Smith, who is just days from her due date, had to miss the vote after she was taken to hospital after a ‘scare’ and has been advised not to travel.

Ms Smith is one of three MPs on the Opposition benches who are in the latter stages of pregnancy. Lib Dem deputy leader Jo Swinson also turned up to vote.